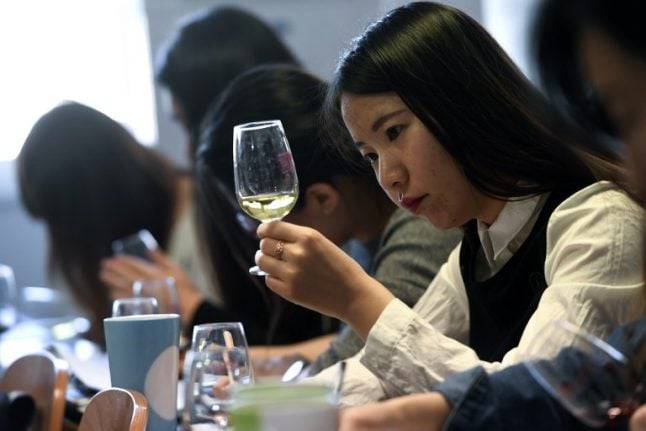 She is part of a group of Chinese students diligently imbibing the secrets of winemaking in the rolling hills of the central French region.

“For most Chinese consumers, French wine is the best, because it has a long history, and it is very famous in the world,” said 30-year-old Chen.

Like many of her peers at the School of Wine and Spirits Business, she wants to sell French and other foreign wines in China after she finishes the one-year course.

Wine glass and pen and paper in hand, the students start earning their viticulture stripes, mastering tasting terms in English.

They also study marketing, with a special emphasis on doing business in China. While China has grown into a prolific buyer of wine, the country has also set its sights on making its own.

Last year, China produced an estimated 11.5 million hectolitres of wine and ranked as the sixth-largest producer in the world, according to the International Organisation of Vine and Wine.

For Chinese wine enthusiasts, certification in French oenology translates into considerable cachet back home when they find work in the country's nascent wine industry.

“In China, wine is more like a luxury product. When I tell my friends I'm majoring in wine management, they say 'Wow, that's cool!',” said Liu Xinyang, 22.

“I think it's a well-respected profession, and it's not hard to find a job with this diploma,” she said. As China's middle class has grown and developed a taste for fine wine, France has seen its exports to the country surge — they rose by 12.7 percent last year.

At the same time, Chinese investors are snapping up French vineyards, with Chinese tycoons owning more than 100 properties in Bordeaux, the famous wine-producing region of southwest France.

A taste for luxury

Yang Tingting, a lecturer at China's Wine and Spirit Education Trust, a wine and spirits professional academy in Beijing, told AFP: “Wine from Bordeaux is a bestseller in China, especially, good-quality red wine in the lower price range.”

As a high-status product, image and branding are as important as taste, according to Wei Wei, who owns a wine shop in the capital.

“Wine with a better and more delicate packaging is popular, as many Chinese consumers buy wine to give others as a gift,” she said. Expensive reds from Bordeaux, such as Chateau Lafite Rothschild and Chateau Mouton Rothschild, remain the most coveted in the Middle Kingdom, according to Wei.

Demand is driven by the wealthy's thirst for luxury.

Burgundy is not far behind in the popularity contest, emerging as a strong rival to Bordeaux in the Chinese market.

Nestled in its picture-postcard hills is a narrow 60-kilometre (35-mile) stretch of land where no fewer than 1,000 “climats” — areas with distinct geological and weather conditions — coexist.

The school has had to turn away some Chinese applicants to maintain balance in the student body — and because it wants networking to take place between Asian and European students.

But Chinese students are welcomed as both future customers and promoters of French wine back home.

“What we want is not just for them to sell our wine, but to go home with a piece of this school, a piece of Burgundy and a piece of France in their hearts,” Gallo said. Steve Charters, a British-Australian teacher at the school, said the know-how the students acquire will start them on the road to excellence — but it will be a long journey.

“It's taken France 2,500 years to work out its best terroirs (prime winegrowing parcels), its best sites and how to make the wine,” Charters said.

But he added the Chinese students were fast learners, with the ability to bring their own perspective to the table.

“Because they don't have a longstanding culture of wine consumption,they're more open-minded.

“They love Bordeaux, they love Burgundy, that's absolutely true, but it's easier for them to say 'Ah, yes, but Chile makes good wine, or South Africa makes good wine',” he added.

And, so far, the market for French and other foreign wines is small: about 80 percent of Chinese consumers drink wine made in China.