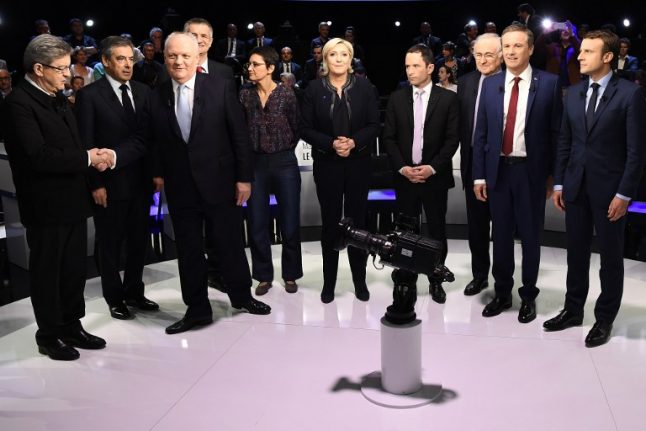 Having 11 candidates created a chaotic spectacle

Viewers must have become frustrated the number of times the presenters tried to get control of the candidates or argued with them over their answers or the time they had remaining.

With 11 candidates allowed, in theory at least, 17 minutes each including one-minute introductions, it was inevitable that it would be hard to control. At one point, when Marine Le Pen nearly hit the 18 minute mark – five minutes ahead of others, frustration boiled over and Socialist candidate Benoit Hamon told the presenters “to do their job”.

Le Pen then blasted the journalists for not letting candidates attack Macron. “They are big boys,” she said angrily.

The problem was the candidates more often than not ignored their instructions.

At times the audience were seen struggling to keep their eyes open as the debate dragged on for three and half hours.

You could understand why some candidates have refused to take part in a second debate later this month, once again involving all 11. The hosts had a hard time keeping it together.

The “little candidates” did land some good blows

Despite the disjointed and raucous nature of the debate caused by having so many candidates some of the outsiders, who clearly had little if anything to lose, did give value for money and landed some of the biggest blows.

Fast-talking anti-capitalist Philippe Poutou (below) prompted laughter among his aides when he took on both François Fillon and Marine Le Pen on the subject of morality in public life. He said “the more we look into Fillon the more corruption we find,” he said before criticising Fillon for telling the public to tighten their belts “while stealing from the public funds”.

At one point Fillon appeared to threaten to sue him.

He then accused Marine Le Pen of stealing from the Europe’s tills and in a stinging criticism of her refusal to answer a judges’ summons over fake jobs allegations surrounding her party.

“When we are summoned by the police we don’t have immunity for workers.”

François Asselineau landed a blow on Macron that had Le Pen laughing when he joked that the En Marche candidate “agreed with everyone.” While most expected frontrunner Emmanuel Macron to be the most targeted by his rivals, it was in the end the far right candidate Marine Le Pen who came under repeated attack.

He blasted her plans to scrap the euro and revert to the franc. “What you are proposing, Madame Le Pen, is a reduction in French people's spending power,” Macron said accusing her of wanting to start an economic war with France's neighbours.

Macron accused her of peddling the same lies to the French people that her father did 40 years ago.

Fillon lambasted her for having no economic plan for France other than to leave Europe.

Socialist Hamon accused her of profiting from the presence of Isis terrorists and that she and her niece Marion Maréchel Le Pen were the worst “fundamentalists”.

And leftist Jean-Luc Melenchon ridiculed her idea of secularism as being “Christmas nativity scenes in Town Halls”.

Le Pen, being Le Pen did not take the attacks lying down and her loyal voters were given something to cheer. When the debate got onto the thorny issue of morality in the public life for politicians you could sense François Fillon’s anxiety levels rising.

But the candidate, whose campaign has been scuppered by the fake jobs scandal involving his wife came out fighting with some carefully prepared lines.

He then once again vowed that only the French people will judge him and not journalists. In other words “I’m not going anywhere”. At times we forgot Emmanuel Macron was one of the debaters, given the long periods which he didn’t speak. He rarely butted in to interrupt rivals as Le Pen and her fellow nationalist Nicolas Dupont-Aignan did.

While he may not have landed any real blows, apart from his attack on Le Pen and her “lies” Macron will be fairly happy to have emerged from another debate with his candidacy in tact.

Polls in the next few days will likely show him as one of the two frontrunners alongside Marine Le Pen. A snap poll of TV viewers after the debate revealed they found Jean-Luc Melenchon (25 percent) the most convincing, followed by Emmanuel Macron (21 percent).

Fillon followed in third on 15 percent with Marine Le Pen on 11 percent.

SEE ALSO: Who were the real winners of the second debate?

Melenchon has been on the up since he shone in the first debate last month. He has risen in the polls as he did before the 2012 election, but is still unlikely to challenge the two frontrunners.

Loser: Europe, the EU was at the root of the most friction

The fact that the subject of Europe, in particular the issue of cheap labour from eastern Europe, prompted some of the most heated discussions given that there were at least four candidates who could be considered anti-EU.

While Le Pen and her fellow anti-EU sovereigntist Nicolas Dupont-Aignan repeatedly attacked Europe as did François Asselineau, who wants an immediate Frexit, others like Macron and Hamon defended the European project.

If pro-EU Macron and anti-EU Le Pen do ending up facing each other in the second round run-off vote, the election could indeed be transformed into the equivalent of a Frexit referendum.

Becasue not much will have changed

It was the first time that all candidates had debated before the first round of a presidential election in France with many observers skeptical about whether the format would help inform voters.

An editorial in Le Figaro also said “it is not certain that at the end of this unique debate voters will be more enlightened”.

While it was undoubtedly a spectacle, will it really have helped confirm or change voters opinions? It's unlikely given the main candidates repeated what they have already said in the short time they were given to speak.

Nevertheless that doesn't mean that things won't change in the coming weeks.

While Le Pen's place in the run-off vote on May 7th looks guaranteed, Fillon is adamant he can pull off an unlikely comeback and pip Emmanuel Macron to the second spot. Although time is running out.