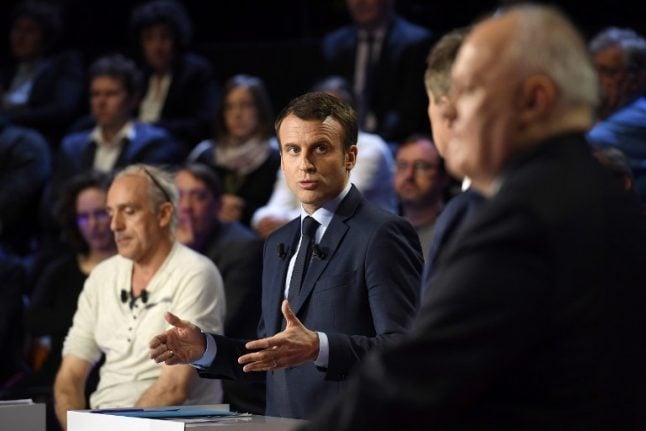 All photos: AFP
Here are some of the standout quotes from the debate:
Taking on corruption
“Since January, it's been a goldmine. With (Francois) Fillon, the more you look the more corruption and cheating you find,” said Philippe Poutou of the New Anti-Capitalist Party, taking on the conservative candidate who faces charges of abuse of public funds over a fake jobs scandal that erupted in January.
“He's a guy who tells you we must tighten our belts and have austerity but who dips into the public coffers,” said Poutou, before turning to far-right candidate and MEP Marine Le Pen, whose National Front (FN) party has several financial probes pending.
“It's the same, you dip into the public coffers, if it's not here it's in Europe,” Poutou said. “And the FN … doesn't have to worry because it's protected by parliamentary immunity.”
Fillon and Le Pen deny wrongdoing and say they will be shown to be innocent. Fillon won't be intimidated
“Not only have I not admitted any mistakes,” said Fillon. “I refuse to answer journalists who for two and a half months have carried out my trial. People have wanted to silence me, to eliminate me. I am still here,” said the 63-year-old candidate who overcame intense pressure to drop his bid after the revelations emerged in January.
“No one can intimidate me. The French people will pronounce their verdict in a little less than three weeks.” Conflating terrorists with immigrants
“I can say what I won't do is seize on every attack, every tragedy, to conflate terrorists with migrants, immigrants and Muslims,” said Nathalie Arnault of the far-left Lutte Ouvriere (Workers' Struggle) party when asked how she would protect France, which has suffered a string of attacks since early 2015.
“It's what you do all the time, Marine Le Pen and Francois Fillon,” she added.
'Fish rot from the head down'
“As the Chinese say, fish rot from the head down,” said Francois Asselineau, president of the small conservative Popular Republican Union, asked to describe the exemplary president.
“The president should be respectable, should not enjoy the advantages of his position in an exaggerated way. It's not for him to get on magazine covers with his wife,” he said in a broadside at frontrunner Emmanuel Macron.
Macron, 39, has been regularly pictured on the frontpages of glossy magazines posing with his wife Brigitte, his former school teacher who is 24 years older than him.
“There should be no American-style first lady, no showbiz,” Asselineau continued. 'Give us a break about religion'
“You want to put religious symbols in town halls? Is that your vision of secularism?” far-left candidate Jean-Luc Melenchon challenged the anti-immigrant, nationalist Le Pen, who responded: “It's our identity.”
Melenchon shot back: “But 60 percent of the French have no religion. Give us a break about religion!”
SEE MORE of our French election coverage here