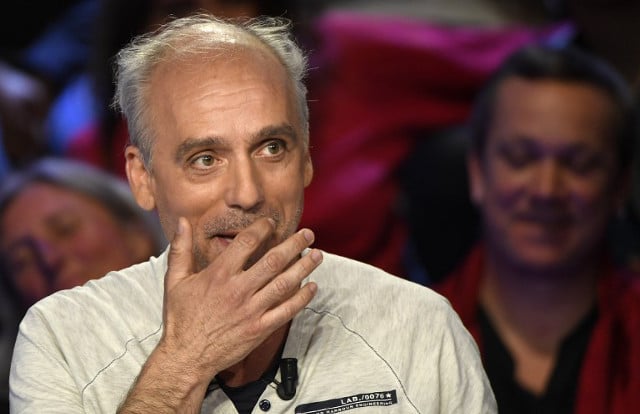 Photo: AFP
The far-left candidate started on Tuesday night by refusing to take part in a group photo and became ruder as the night went on, emerging in the process as a voice of voter anger in a campaign dominated by scandals.
Poutou, a balding 50-year-old wearing a long-sleeved T-shirt who slouched over his lectern for parts of the three-hour televised exchange, signalled his intent with his opening remarks.
“Aside from (communist candidate) Natalie Arthaud, I think I'm the only person standing at these lecterns to have a normal profession, a normal job,” said the mechanic from southwest Bordeaux.
“We can speak in the name of millions who are suffering from the (financial) crisis, who suffer in this society and are sick to death of this capitalist steamroller destroying everything in its path,” he added.
The clash between the amateur and the “corrupt” professional political class was brutal at times, with Poutou expressing the sort of frustration regularly heard from voters on streets around France.
He harangued rightwing Republicans party candidate Francois Fillon who has been charged for misusing public funds after paying his wife hundreds of thousands of euros for an allegedly fake job in parliament.
A visibly angry Fillon, a 61-year-old former prime minister who accepted gifts of clothing worth thousands of euros earlier this year, threatened to “hit you with a lawsuit.”
Poutou, whose name means “little kiss”, also took on far-right leader Marine Le Pen after she invoked her parliamentary immunity to dodge a hearing with an investigating magistrate looking into allegations of expenses fraud.
“When we're called in by the police, there's no worker's immunity!” he said, drawing spontaneous applause from the audience.
Frontrunner Emmanuel Macron, a slick 39-year-old former investment banker schooled at France's best universities, “knows nothing about work,” he added. 'Dirty tricks'
His performance, peppered with coarse language, was an instant hit on social media, where he became one of the most commented figures of the evening which featured all 11 candidates for the first time.
Writing on the Mediapart website, commentator Christophe Gueugneau said that Poutou “had shown himself to be the natural representative of the working class, a voice for normal people to have a go at the professional politicians.”
He also brought up the corruption allegations that have overshadowed the two-stage election on April 23 and May 7 — and which were barely addressed in the first debate last month to the frustration of many.
“I received a lot of text messages and tweets encouraging me to express people's anger, particularly after all the dirty tricks from the politicians. I hope I didn't disappoint,” Poutou said afterwards.
Others were critical of a man who stands little chance of being elected  — he won 1.15 percent when he stood for the first time in 2012 — and his answers on policy issues such as Europe or the economy were sometimes confused
or incoherent.
His signature proposals include banning companies from firing workers, reducing the working week to 32 hours, and expropriating company profits and the banking sector.
“I don't think Philippe Poutou deserves any honours,” Anna Cabana, a political commentator on news channel BFM TV, said afterwards. “He acted very disrespectfully.”
His call for class struggle, backed by the fiery Trotskyist Arthaud, at times gave the debate a throwback feel of postwar France when the Communist party was a force in national politics.
Poutou also fits the mould of other working-class firebrands of the modern era — electorally unsuccessful but briefly celebrated in a country with a rebellious streak and a bloody history of turning against its ruling class.
Others have included Olivier Besancenot, a charismatic part-time postman who wanted to abolish the stock market, or anti-globalisation campaigner Jose Bove who became famous after trashing a McDonalds in 1999.
“Philippe Poutou will not be president of the republic, fortunately for the French people,” one of Fillon's closest allies, Bruno Retailleau, told CNews on Wednesday morning.
“Personally I don't share his vision of France, divided between classes,” he said.