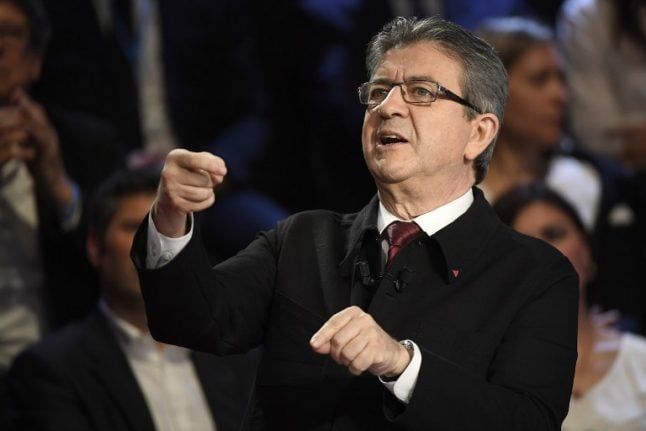 Far-left wildcard Jean-Luc Melenchon. Photo AFP
It was far-left firebrand Jean-Luc Mélenchon was convinced most viewers, according to an Elabe poll for French TV station BFM TV, which aired the debate.
In fact some 25 percent of viewers figured the 65-year-old candidate was the “most convincing” of them all.
Mélenchon set social media alight on Tuesday night for his memorable lines, telling Le Pen to “give us a break about religion”, asking if her proposition to put religious symbols in town halls was her “vision of secularism”.
SEE MORE: The best quotes from France's presidential debate Just behind him was one of the current front runners for the presidency, Emmanuel Macron, whose arguments were most convincing according to 21 percent of respondents. Macron also landed blows on the far right Le Pen, telling her “you tell the same lies as your father did“.
Viewers put scandal-hit Francois Fillon in third place, although his 15 percent of support was a fair way behind Macron. National Front leader Marine Le Pen only reached 4th position with 11 percent, she is widely tipped to make it to the second round run-off against Emmanuel Macron.
At 5th most convincing was Socialist party candidate Benoit Hamon, with 9 percent. Photo: Infographie Visactu
The “other six” candidates from France's smaller parties followed up the rear.
Right-wing Nicolas Dupont-Aignan came in at 6 percent, far left anti-capitalist Philippe Poutou gained 5 percent, communist candidate Nathalie Arthaud polled at 3 percent and Francois Asselineau also gained 3 percent.
At the bottom of the leader board were centrist Jean Lassalle, who only gained 1 percent, and controversial far left candidate Jacques Cheminade, who failed to win over any percentage of BFM TV viewers.
SEE MORE of our French election coverage here