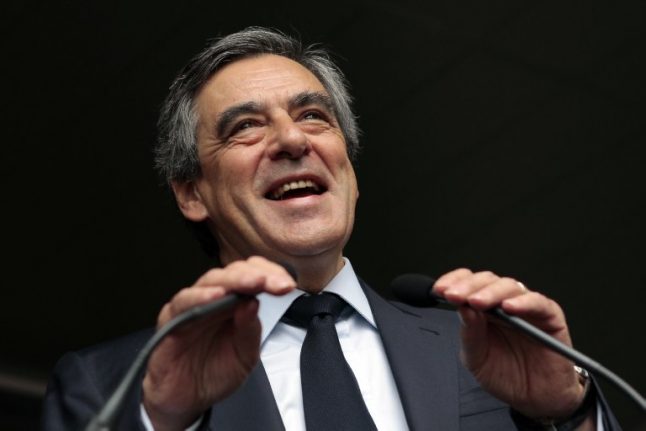 All photos: AFP
Ever since it was revealed that his wife had been paid a lot of money (€680,000) for allegedly apparently very little, it's been headache after headache for the 63-year-old.
He is currently polling at around 17 to 19 percent, which is around 7 to 9 points behind the leaders (Emmanuel Macron and Marine Le Pen).
He needs to finish in the top two on April 23rd to get to the second and final round of the election, which despite his woes, he is predicted to win, if its against Le Pen.
And while that might seem unlikely, here are seven reasons why Fillon still thinks he can win and why he might just be right.
1. He has won as the outsider before
Cast your mind back to the centre-right primary from November last year. Fillon wasn't tipped to win, in fact he was coming third in the polls in the same month as the vote. Somehow, he beat both longtime favourite Alain Juppé and former president Nicolas Sarkozy in the first round, finishing with 44 percent of the vote.
He won the second round against Juppé handsomely, taking in 67 percent of the vote compared to Juppé's 33 percent.
Maybe he can do it again… and he believes it himself.
“My instinct rarely fails me, and my instinct is starting to tell me that this is going to end well,” Fillon recently said, a member of his campaign told Le Parisien newspaper. 2. He still has strong support
It's not like Fillon's supporters are all turning their backs on him.
For a start, even after all the scandals and outrage he still has a firm base support of around 19 percent that will back him through thick and thin, it seems.
Some 5,000 people turned up to see him talk last week in Toulon, in southern France. And he has an upcoming rally in Paris that is expected to see 20,000 attendees (compared to the 15,000 for Macron at the same place in December).
“I have experience when it comes to rallies, and I know when they're packed and I know when people don't show up. These are the signs that don't let you down,” he told Le Figaro newspaper after a recent rally in southern France.
But let's not forget that in 2012, Nicolas Sarkozy's rallies were far more popular than Francois Hollande's – and yet it was Hollande who was voted in as president. 3. … and there's still plenty of time left
While it would be a remarkable comeback if Fillon is to win, he still has three solid weeks before the first round of voting – and that's a lifetime in an election campaign.
Fillon has been busy using the time to try and narrow the gap between himself and the leaders, organizing rallies in Marseille, Lyon, and Lille in the coming weeks, as well as the one in the Porte de Versailles in Paris on Sunday.
“This last phase is going to be absolutely vital in determining the result of the first round,” Fillon's campaign director Vincent Chriqui told Le Parisien newspaper. 4. He has already proved to be resilient
Ok, back to the scandals for a moment. Francois Fillon has said – repeatedly – that he is not guilty of misusing public funds to pay for his wife's work as his parliamentary aide.
It's true, he hasn't kept a low profile in the face of the “Penelopegate” scandal but has come out fighting, insisting that he isn't going anywhere ,while most candidates would have long since thrown the towel in.
Fillon has aimed his swings at the magistrates, the press and even President François Hollande for trying to “politically assassinate” him.
“I won't give in, I won't surrender and I won't withdraw,” he said.
Whether you believe him or not – you have to admire his stubbornness. 5. He believes voters care more about a change in power than scandals
Voters want a “rupture” to pull France out of the mire – and scandals about allegedly fictitious jobs pale in comparison. At least that's what Fillon's team believes.
Those keen on Fillon's policies will surely vote for him, no matter how they feel about Penelope Fillon's salary.
“Rationality will prevail on the day of the ballot,” Republican MP Eric Woerth told Le Monde newspaper.
“While many people who voted for him in the primaries may be having their doubts, I'm sure they will cast a vote when it comes to the crunch.” 6. He'll get the so-called hidden votes (from 'embarrassed' voters)
Another reason Fillon thinks he can win is famous “the hidden vote”. In other words, he thinks some voters might be embarrassed to admit to pollsters that they are actually going to vote for him.
“People don't necessarily want to say that they're going to vote for Fillon, even if it's a sure thing,” Republican MP Valérie Boyer told BFM TV.
Come election day, he is convinced that his result will not reflect the current polls.
However, there are two problems with this theory. One is that Le Pen voters might have the same approach (too scared to admit it but will vote anyway), and the other is that polling companies say it's rare that people lie in the polls, especially now it's possible to do so anonymously online. 7. Macron can still blow it
While Emmanuel Macron is indeed far ahead of Fillon in the polls, that doesn't mean he is a certainty to make the second round.
In Tuesday night's debate, it's expected that the other ten candidates will go after the younger and more inexperienced Macron because he is the current man to beat.
The Fillon camp has already launched a smear campaign where they started to call Macron “Emmanuel Hollande” (see Twitter photo below) in a bid to show how similar Macron is to the ever-unpopular president.
At the same time, don't forget that while Le Pen's loyal supporters typically have both feet firmly in the Le Pen camp, Macron's followers poll as the most volatile bunch of the lot and may yet be swayed elsewhere.
Can Fillon capitalize on this? Photo: Twitter/ICopernic
So can Fillon do it? Remember, he only really has to make the second round.
Once there, and if he ends up against Marine Le Pen, Fillon should emerge as the winner, perhaps not as convincingly as he would like, but the anti-National Front vote should still see him granted the keys to the Elysée. At least that's what the latest polls suggest.
SEE MORE of our French election coverage here