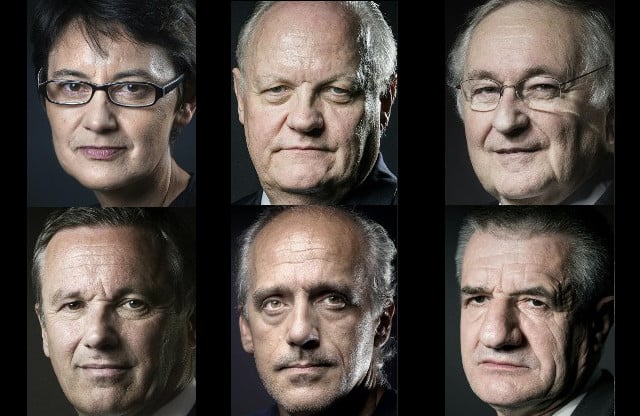 In the French system, anyone can run to become president, providing they gather 500 signatures from elected officials to support their campaign by March 17th.

The 2017 elections have seen 11 candidates reach the magical 500 mark – and on Tuesday night they will all face off in a debate, with just under three weeks before the first round of the voting.

And while we've seen plenty of headlines about the top five contenders (Le Pen, Macron, Fillon, Melenchon, and Hamon) – what do you actually know about the other six?
It's them who have the most to gain in Tuesday's debate.
Here's a guide to the other six, who are all polling at about one percent or less (besides Nicolas Dupont-Aignan, who is around 4 percent). The nationalist Nicolas Dupont-Aignan likes harking back to the days when General de Gaulle ruled France and wants make the country more patriotic. He founded his party Debout La France (France Arise) in 1999, and it had reached 15,000 members in 2015.

As a mate of former Ukip leader and fellow anti-EU figure Nigel Farage, Dupont-Aignan was naturally over the moon at Brexit and wants to push for a Frexit.

“It's now or never. The British have an historic chance to escape from prison and when you see a prison door open up, you have to get out,” he told The Local before the referendum last June.

“And when the French get the same vote one day, there's no doubt they will vote to leave the EU,” he added.

Like his fellow nationalist Marine Le Pen he wants to get rid of the Euro, and go back to the Franc as well as favouring companies that have a more patriotic stance and push the “Made in France” label.

Dubbed the “king of buzz” by Franceinfo radio news network, he's known for his unusual campaigns and political stunts such as crossing the French border with a kalashnikov rifle in his car boot to make a point about security or popping up in motorway toll booths to talk to voters, offering to pay their fare if they speak to him.

Dupont-Aignan is furious that TF1 didn't invited him to the last official candidates' debate in March. The TV channel only sent out invitations to the candidates who were expected to win at least 10 percent of the votes, and Dupont-Aignan was only expected to gain 3 percent.

But at a respectable 707 sponsors, he will still be running for election. When she was just 18 years old, Nathalie Arthaud joined France's long-standing Trotskyist party, the Lutte Ouvrière. A part-time teacher in a high-school in Seine Saint Denis, she's since climbed up the ranks to become the party leader.

With a strong worker's programme, she plans to bar companies from laying off workers if they're making a profit, in an attempt to curb mass unemployment.

She told RMC recently that France's minimum wage isn't enough for people to live with dignity and that it should be raised from €1,457 to a minimum of €1,800 net a month.

She pulled in 637 signatures. He created his right wing party Union Populaire Républicaine ten years ago, but between 2012 and today, it's seen an explosion in membership, the number of members soaring from 700 to over 16,500.

His rhetoric has been called both anti-US and underpinned by conspiracy theories, Asselineau believes there are subliminal US images in French party logos.

His career has largely been in economics, and he's a tax inspector for France's audit body Inspection Général des Finances (IGF)

He wants to get rid of the Euro and leave NATO. He also wants a Frexit and thinks Le Pen's National Front is too moderate on the issue of sovereignty.

François Asselineau prefers to stay away from the “media censorship” and uses social media instead to promote his ideas. His army of supporters has put up 200,000 posters across France and plans to add another 150,000 in the upcoming weeks.

After failing to obtain enough signatures in 2012, he has made the cut this year at 587. Notorious for his headline grabbing ideas, one of his campaign promises is to colonize the planet Mars and industrialise the moon. Other “Cheminaderies” as they've been dubbed, (a play on words on the French word for bullsh*t) include comparing Barack Obama to Hitler and accusing the Queen of England of being involved in international drug trafficking.

He founded his party Solidarité et progrès in 1996 and it serves as the French branch of the US LaRouche movement, led by American political extremist Lyndon LaRouche. In 2005, Cheminade's party was listed as a 'political sect' by French governmental agency.

His key aim is to change the international financial system and his campaign line this year is “let's liberate ourselves from the financial occupation.”

Cheminade has managed to pass the 500 mark at 528 signatures. The small town mayor is known as the “shepherd of the political world”, hailing from a family of shepherds.

Candidate for the centrist “MoDem” democratic movement party, he has said that France has no confidence in anything anymore, and is famous for his 2006 hunger strike against a factory relocation and his walk across France to “meet the people” in 2013.

With 708 signatures, Lassalle is another surprise candidate for the election. Poutou splits his time between Ford factory worker and unionist and being a far left politician – and he is running as the New Anti-capitalist Party candidate.

His slogan is “Our lives, not their profits” and he wants to get rid of the position of president in France, introduce a minimum wage level “pre-salary” for students, to bring an end to France's state of emergency, and to open its borders.