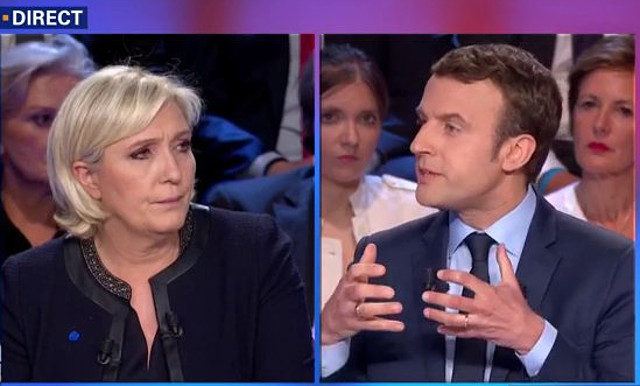 All 11 candidates in France's presidential election, from frontrunners Marine Le Pen and Emmanuel Macron down to the minnows, took part in a giant TV debate on Tuesday seeking to swing undecided voters.

With just 19 days until the first round of voting in a rollercoaster contest, the debate could influence the momentum of the campaign, with support for 39-year-old Macron still seen as fragile and conservative François Fillon believing he can make an unlikely comeback.

Polls show far-right candidate Le Pen and centrist independent Macron in a dead heat at around 25 percent heading into the first round on April 23.

And the first fierce exchange during Tuesday's debate was between the current favourites.

“Europe allows protection,” said Macron. “What you are proposing Madame Le Pen is a drop in spending power [for French workers]. That would mean economic war.

“What you are proposing is nationalism and that means war,” he told Le Pen, who rolled her eyes and bellowed a stern “oh lo lo”.

He then told the far right candidate that “she was coming out with the same lies that came from the mouth of her father 40 years ago.”

Le Pen's father Jean-Marie led the National Front party until handing power over to his daughter in 2011. He has been convicted several times of hate speech and Holocaust denial.

Macron, whom the daily Le Parisien on Tuesday dubbed “the man to beat”, has warned that commentators are still underestimating Le Pen.

Those who say she stood no chance in May's deciding round — between the top two places in the first round on April 23 — are “the same people who said (Donald) Trump couldn't win”, Macron said.

One candidate who needed to shine is conservative Francois Fillon, who has begun clawing back ground after his campaign was almost derailed by criminal charges over claims he paid his wife hundreds of thousands of euros for fake parliamentary jobs.

Fillon however remained fairly calm and quiet during the early exchanges, presumably hoping to appear presidential rather than get stuck into arguments with the other candidates.

He did however get stuck into Le Pen saying she has only one economic plan and that's to leave Europe, which Fillon says will fall flat when the French people reject her referendum on leaving.

Le Pen also came under fire from the Socialist party candidate Benoit Hamon after she prompted gasps and groans when by saying “France was a university of jihadists”.

Hamon then accused Le Pen of profiting from the existence of terror group Isis.

“It really suits you that they are there,” Hamon said before accusing her and her niece Marion Maréchel-Le Pen of being “the worst fundamentalists”.

In the crowded debate, each candidate was allowed to speak for around 15 minutes and the questions were restricted to just three themes — how to create jobs, how to protect France, and the thorny issue of how each candidate would implement their vision of France's social model.

The final result of an election that is being watched closely around the world is still seen as highly unpredictable.

Dissatisfaction and outright hostility towards mainstream politics is high in France and surveys show around a third of voters plan to abstain, while around a third of likely voters say they have still not made up their minds.