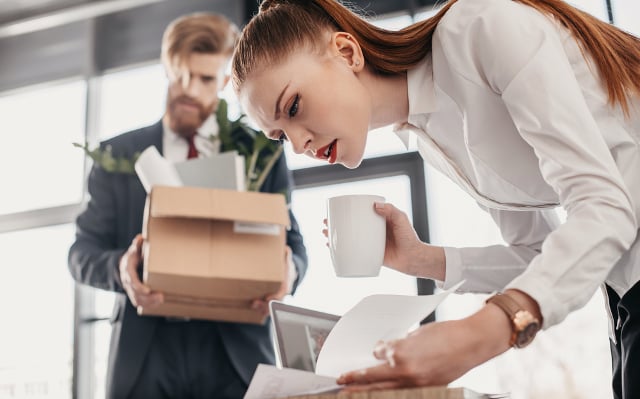 Photo: ArturVerkhovetskiy/Depositphotos
Here are the missteps you should never make:
1. Leave early
Although you might think that showing up at the crack of dawn will automatically buy you a ticket to leave early – think again. The French are hard workers and many typically work past 7pm so don't be walking out at five on the dot.
And besides, the French tend to start work later, so they'll blissfully unaware of your early starts. Photo: Stokkete/Depositphotos
2. Ignore the meet and greet
The French are big fans of greeting each other in the morning. Heading straight to your desk without first having done the expected office round of handshaking or “la bise” (cheek-kissing) may be perceived as rude and even obnoxious, no matter how much work is piled up on your desk.

READ ALSO: Should two expats in France 'faire la bise'?
3. Eat lunch at your desk, alone
The French love their “déjeuner”, but also the company and conversations that come with it. Bringing your own lunch and not joining your colleagues can be seen as a big no-no. They may think you’re a little unsocialable and even weird. And you’ve probably just become their main topic of discussion during lunch. As an added bonus, having a sit-down lunch with colleagues may help you improve your language skills.
4. Get drunk at the office 'pot'
Yes, the French love their wine, and often find an excuse to bring some into the office, whether it’s a birthday, a send-off or just because it’s Friday. But don’t have too much of the good stuff. While getting sloshed might be accepted, even encouraged, at work nights out back home, don't assume that will work here too. Photo: Wavebreakmedia/Depositphotos
5. Talk about money
Unless you’re in a meeting with the payroll department, keep any talk of money to yourself. The question of how much money someone makes is social taboo, discussed only in private, with family or very close friends. Some say the taboo stems from a traditional fear of the tax-man, but The Local has not been able to independently verify this claim. There is also a general disapproval of openly flaunting wealth. Even President François Hollande once said he “doesn't like the rich”.
6. Skip the formalities
“Bonjour” is without doubt the most important French word to know. Not using could make you an outcast in an instant, depending on the type of office you work in. And then there is that tricky business of knowing when to use “tu” or “vous” when addressing someone. As a rule of thumb, and unless you’re told differently, say “vous” to all your superiors and any clients you meet through work. In fact just say “vous” to everyone to be safe.
READ ALSO: This is by far the most important word in French
7. Do small talk
Stuck in the elevator with your boss? The best bet to remain on a good footing with him or her is to just say “bonjour”, and then leave it at that. No point going on about the weather, necessarily. The French they tend to find irrelevant small talk unnecessary. It may feel uncomfortable at first but you'll soon admire their honesty.

SEE ALSO: Five tips for taking an elevator in France Photo: Wavebreakmedia/Depositphotos
8. Ask for a pay rise too often
Although a French employer might even respect you by asking for a pay rise, they only expect you to ask for it once a year. Any more than that and you’re starting to get annoying. The French typically enjoy a good debate, so make sure you are well-prepared for that once-a-year pitch.
9. Stay quiet in meetings
It is common for French meetings to go on a bit. The reason is that everyone needs to have had their say before they are brought to an end, regardless of whether it’s interesting. And unless you’re brand new on the job, they expect you to do so too. By remaining silent you could be viewed as a push-over. Photo: Deklofenak/Depositphotos
10. Sidestep the hierarchy
The French workplace is very hierarchical. Side-stepping your manager by directly approaching his or her boss is frowned upon and could cost you valuable support from people who previously had your back. Go through the proper channels, no matter how much time and energy you could have saved by taking a shortcut.
See job listings in France here