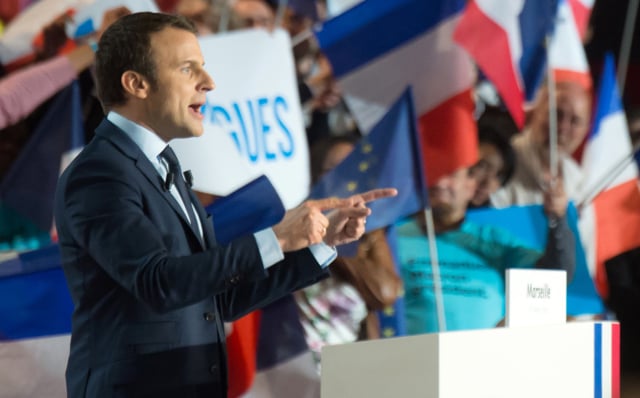 All photos: AFP
Both Fillon and far right candidate Marine Le Pen have repeatedly attacked the novice Macron in recent weeks as he has surged in the polls to become the favourite to win the election.
The problem with being the favourite is that Macron will have to get used to the verbal volleys in his direction coming from all sides including leftist candidates Benoit Hamon and Jean-Luc Melenchon.
Fillon dubbed Macron “Emmanuel Hollande” in a bid to panic voters into thinking a vote for Macron would be like re-electing the current president François Hollande, whose popularity poll ratings reached record lows.
If anyone can perhaps threaten Macron's place in the second round, where he will almost certainly face Marine Le Pen, then it's François Fillon, who has already risen from the dead several times already during this election campaign and knows how to pull off a shock election win as he did in November's conservative primary.
Despite all his troubles involving his wife's alleged fake jobs and his free deluxe suits, it would be folly to write Fillon off just yet.
Tuesday's debate will see all 11 contenders take to the stage for the first time, again favouring a memorable soundbite over waffle and leaving little time for anyone to make an impact.
It could play a crucial role in swinging momentum in the closing weeks of the campaign, with support for 39-year-old centrist frontrunner Emmanuel Macron still seen as fragile.
An initially nervous Macron emerged unscathed from the first debate despite occasionally seeming to struggle in what was his first experience of the format.
“Voters are looking to see who will be up to the job of the president. It's an opportunity to take a second look,” senior pollster Bruno Jeanbart from the OpinionWay group told AFP.
The final result of the two-stage election is still seen as highly uncertain. Surveys show around a third of voters plan to abstain, while around a third of likely voters say they still have not made up their minds.
Macron stressed Monday that commentators were still underestimating Le Pen, saying those who said she stood no chance were “the same people who said (Donald) Trump couldn't win”. Less of a hothead?
The other surprise package in this year's presidential debate is the far left's Jean-Luc Melenchon.
Usually grumpy and always acid-tongued, Communist-backed Melenchon goes into the second French presidential debate on Tuesday on a high, comparing his campaign to a spring-time flower bed.
For months Melenchon limped behind in fifth place, his role apparently limited to siphoning off votes from the beleaguered Socialist party in the first round of the presidential vote — until a decisive change in sentiment last month.
“It's like the spring, you don't see it then, boom! There are flowers everywhere,” he told a rally on Sunday, welcoming polls  — “favourable horoscopes”, he called them — which show support for him surging.
A dramatic climb of five points can be traced back to a strong performance in the first debate on March 20 where his no-frills style and colourful turn of phrase shone in an often messy encounter between the top five candidates.
Melenchon, 65, uttered one of the lines of the evening when he accused the moderators of having the “modesty of a gazelle” for failing to press right-wing candidate Francois Fillon and far-right leader Marine Le Pen over their legal problems.
Melenchon has now eclipsed the beleaguered Socialist party candidate Benoit Hamon, with an average of polls showing him winning around 15 percent, higher than the 11.1 percent he registered in his first run for the presidency in 2012.
Hamon is falling towards single figures.
Melenchon is also closing the gap on right-winger Fillon (17 percent) from the Republicans party, whose campaign has been torpedoed by a series of allegations, including that he paid his wife hundreds of thousands of euros for a fake parliamentary job.
The veteran politician is also positioned as another “outsider” in an election dominated by voter anger at France's political class, as well as fears about job losses and terrorism.
The one-time Trotskyist quit the Socialist party after more than 30 years in 2008 to co-found a new leftist party. Last year, he created his current movement La France Insoumise, “France Unbowed”.
Over the years he has forged a reputation as an often aggressive anti-establishment figure who shares economic policies with Le Pen, while rejecting her hardline rhetoric on immigration and Islam.
Like Le Pen, he rails against globalisation as well as the financial and political elite, writing a book in 2011 called “Get rid of them all. Quick, a citizen's revolution”.
On economic policy, they both propose tax-and-spend redistribution and see their core supporters as workers abandoned by the Socialist and Republicans parties which have shared power for most of France's modern history.
Jeanbart said Melenchon was mainly benefiting from the woes of the socialist candidate Hamon, but to “go beyond, he'll need to broaden his appeal to a much more working-class electorate”.