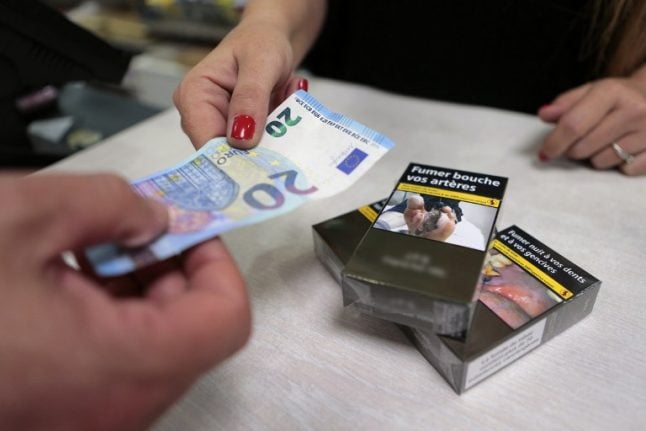 Photo: AFP
When France made the switch to neutral cigarette packages in January this year, the government was forced to buy out all the branded cigarette packages that tobacconists had not sold.
This worked out to be an average of €3,000 per tobacconist in France – even though they had since May last year to get rid of their old stock.
While €3,000 may not sound like too much, there are apparently a lot more tobacconists in France than you'd think, because the total bill came to €100 million, reported BFM TV on Tuesday.
Yes, there were 250 tonnes of branded cigarettes – made up of 15 million packets of cigarettes and loose tobacco packets – that were deemed unusable according to the new law.
This controversial law states that there is to be no eye-catching branding or bright logos, and all packages to be of a uniform size and colour. Brand names remain, but appear in a small, uniform font.
The refund process became all the more laborious when authorities decided that tobacconists needed to also provide information about where they had purchased their cigarettes.
This was reportedly because some cigarette sellers were trying to cheat the system by sending in cigarettes that had been smuggled from elsewhere.
Some 40 workers from cigarette distributor Logista are now slowly sorting the cigs and coughing up for them, in a process that is expected to last until May.
Logista will then be reimbursed by the government, which will in turn get rid of the 15 million packets by burning them, the channel reported.
In other words, €100 million is about to go up in smoke.