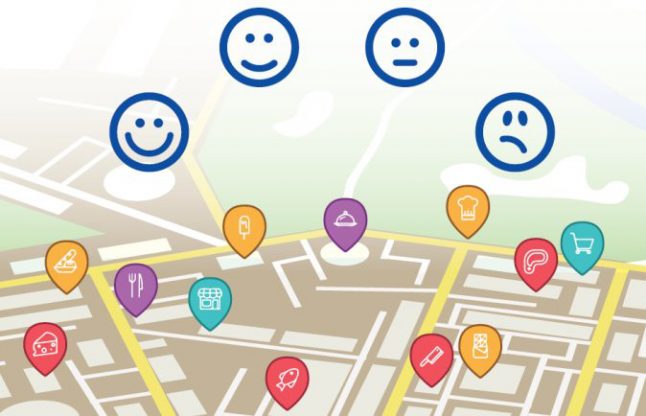 Photo: Ministry of Agriculture
The interactive map and app called Alim'confiance has restaurants' hygiene scores listed from “in need of urgent correction” and “could be improved” to “satisfactory” and “very satisfactory”.
There is also hygiene information for butchers, patisseries, fishmongers', and cheese shops, together with the date the health inspector last visited.
And if that's all a bit complicated, it comes as well with smiley faces (from a worried looking face to one that is positively beaming). See the pic above.
Here's how you can find out the scores and download the app.
For the moment, not all the restaurants in France are on the system, but they will be added over time.
In fact, there are a full 55,000 hygiene checks carried out across France each year (that's a lot of smiley faces) and Monday saw just the publication of the 1,000 or so eateries that were checked in March. Here are the restaurants already on the app across France Here's a closer look at Paris
Hotel and restaurant federation GNI-Synhorcat said despite its involvement with the project, it wasn't all too pleased with the information being made public online – as one “off day” could potentially stick to a restaurant for years.
But a spokesperson from the Ministry of Agriculture said the objective of the app wasn't just to inform customers, but also to improve the level of hygiene throughout the country.
The spokesperson added that other countries that have rolled out similar technology have seen an increase in the hygiene scores.
Planning to eat out tonight? Here's how you can download the app and make a more informed decision – but remember, the rating only applies to cleanliness. The new app doesn't delve into the quality of the food on the menu.
Bon appétit!
See more of the changes in France for April 2017