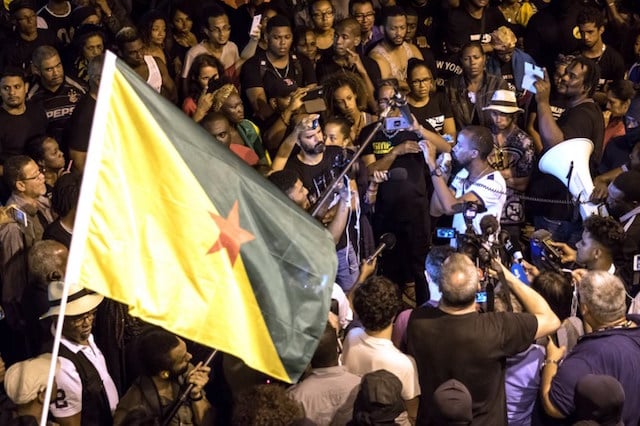 Guiana workers' union secretary general Davy Rimane adresses the protesters after negotations between Guyanese representatives and members of the French government on April 2. Photo: JODY AMIET/AFP
The vast South American territory, which is administered as a region of France, has been in the grip of labour unrest for the past 10 days.
“The government has heard the aspirations and demands of the Guianese,” French Interior Minister Matthias Fekl said at a joint press conference with overseas territories minister Ericka Bareigts.
Fekl earlier listed a series of “firm decisions” to a delegation of around 50 Guianese.
The commitments, mostly for “emergency measures” but some of which run for 10 years, total some 1.085 billion euros, according to Bareigts.
The proposals include investments in health, education and infrastructure, and the deployment of extra police and construction of a prison.
The delegation swiftly described the proposals as “unsatisfactory” but Bareigts said “adjustments” could be envisaged.
Asked about a possible rejection of the proposals by the Guianese, Fekl said he wanted “life to gradually return to normal”.
The collective behind the strikes Saturday called for a “special status” for the territory in talks with Bareigts.
“With another system, we could decide for ourselves what is good for us,” rather than “asking permission for everything” from France, collective member Davy Rimane told AFP.
In a referendum in January 2010, French Guiana voted firmly against autonomy.
“But this crisis is the expression of the failure of this referendum,” said Gauthier Horth, another member of the collective.
Striking workers have set up barricades on several roads and forced the postponement of the launch of an Ariane rocket carrying a Brazilian telecoms satellite.
Workers in several sectors, including the energy giant EDF and public hospitals, have launched protests demanding pay raises and improved public safety and health coverage.
Guiana workers' union secretary general Davy Rimane (white shirt) adresses the protesters after negotations between Guyanese representatives and members of the French government on April 2.
Url copied to clipboard!