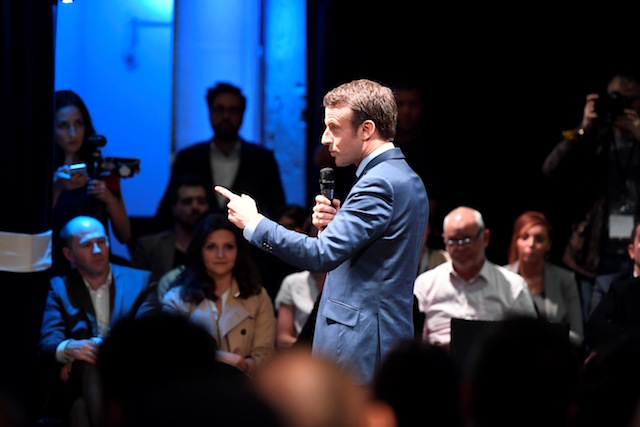 The excitement was palpable as a microphone was passed through a hall in the tough Paris suburb of Saint-Denis, where a hundred high achievers gathered this week to share their stories of against-the-odds success with centrist maverick Emmanuel Macron.

For two hours the 39-year-old candidate listened to, and fielded questions from entrepreneurs, bankers, journalists and civil servants with the kind of names — mostly Arab or west African — that in France often see a CV pushed to the bottom of the pile.

“Usually politicians come to the suburbs when they're burning and then disappear again. Tonight we're not here to talk about those who burn cars. Most people here have masters degrees. Theirs are the stories that need to be highlighted.”

Macron, who is running neck-and-neck with far-right leader Marine Le Pen in polls for the first round of the election on April 23, has promised to bring France's storied “banlieues”, or suburbs, in from the cold with a two-pronged approach that stresses equality and entrepreneurship.

Addressing Thursday's gathering held next to the Stade de France national stadium, he vowed to reduce class sizes in tough neighbourhoods, name-and-shame employers that discriminate against people on the basis of their origins, and promote micro-financing for suburban businesses.

The blue-eyed philosophy graduate, who studied at France's top finishing school before becoming a civil servant and then a Rothschild investment banker before he leaped into politics may seem an unlikely champion of the downtrodden.

Trade unions have accused him of promoting a race to the bottom by declaring that an Uber driver working up to 70 hours a week — one of the few jobs readily available to low-skilled suburban youths in France — had more “dignity” than someone without work.

But his unabashedly pro-business approach has played well in immigrant communities, seen by some as more empowering than the paternalism of the left.

Taking to the floor at the event, Moudnib hailed Macron — an economic liberal who is on the left on social issues — as a role model.

“You've been accused of earning a lot of money at Rothschild but in the suburbs we want to be like you!,” she told him, drawing laughter and applause.

“In France we have a unique characteristic,” Macron replied. “We don't like failure and we don't like success.”

The failure to break into France's traditional big parties was what brought Aziz Francois Ndiaye to Macron's door.

The US-trained Senegalese-born entrepreneur told AFP his overtures to various politicians — like his many job applications — went unheeded, until he contacted Macron's En Marche movement, which put him in charge of campaigning in the western Paris suburbs.

“My life got back on track,” the affable father-of-two said.

While Macron's optimism may have infected Ndiaye, many in suburbs battling high unemployment and radicalisation remain unmoved.

In central Saint-Denis, a Communist-run town of around 100,000 where the ringleader of the 2015 Paris attacks Abdelhamid Abaaoud hid before being killed in a police siege, the mood on a sunny spring afternoon was muted.

In a sign of the lingering jihadist threat, soldiers in fatigues patrolled the street outside the town's imposing 12th century basilica and police vans lined the main square on two sides.

Sitting on a bench outside the basilica — final resting place of a long line of French kings and queens — retiree Michel Castellote said he would abstain in the May 7 election run-off if forced to choose between Macron and Le Pen.

Polls show that Macron would easily beat Le Pen in such a duel but Castellote, a supporter of radical leftist candidate Jean-Luc Melenchon, said he could not bring himself to back the former businessman.

“He doesn't know the suburbs,” said the 76-year-old, complaining of the closure of many traditional shops in Saint-Denis — replaced by halal butcheries, Arab bakeries and Chinese clothing stores.

Several other people interviewed by AFP said they planned to abstain from both rounds of the election, turned off by political scandals and a litany of broken promises.

But butcher Mohammed Hemmar said he was ready to put his trust in the man bidding to become the youngest president in France since World War II.

“We'll try Macron this time, to see what the young people can do,” Algerian-born Hemmar, 47, said as he rang up sales in his blood-splattered apron.

“He's got the stature of a president, he speaks well and he inspires confidence.”