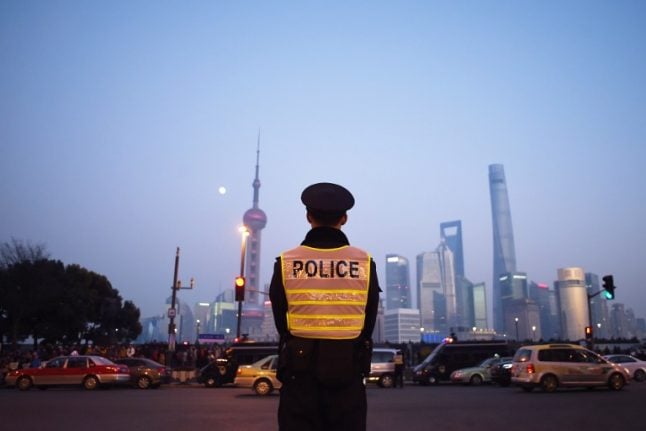 Photo: AFP
France urged its citizens in China to be extra vigilant after a “violent” knife attack on a French national in Shanghai
this week, the country's embassy said on Friday.
The warning came after tensions flared in Paris in recent days with violent demonstrations over the killing of a Chinese national by French police.
A statement from the French embassy in China did not specify the severity of the injuries sustained by the man attacked in Shanghai on Wednesday, but said his attacker had been detained after a Chinese colleague intervened.
It said while the assault appeared to be an isolated incident, French nationals should “in the current context” take note of its advice on vigilance and security.
The message did not directly mention the police shooting in Paris, which has been heavily covered in the Chinese media.
The fatal shooting in Paris has prompted nightly protests by the Chinese community in Paris, with more than 200 joining a fresh protest on Thursday.
The protesters, including many from the Chinese immigrant community, gathered at the central Place de la Republique and waved banners bearing slogans such as “colonialist police” and “Wake up French Asians! You are still oppressed in this country”.
According to Le Parisien newspaper France's internal intelligence agency, the DGSI believe the Chinese mafia in Paris have infiltrated the protests and are using them to their advantage to extend their influence throughout the community.
The incident happened on Sunday night when police shot and killed a 56-year-old Chinese man named as Liu Shaoyo.
Three officers were slightly injured in the incident and one police vehicle was damaged by an incendiary device. A police source told AFP that officers were called to the Chinese man's house after reports of a domestic dispute.
The source said the man attacked the officer with a knife “as soon as the door opened”, injuring him.
A police colleague then opened fire, killing the Chinese man, authorities say.
Lawyer Calvin Job has said the family of the dead man “totally disputes this version of events.”
Yehman Chen, 49, attending Thursday's protest said of the police, “my feeling is that they came to his apartment to kill him.”
Thursday's protest was the fourth straight night of demonstrations in Paris over the death.
There have been some violents incidents with 45 people, including minors, arrested.
The family of Liu Shaoyo have called for calm.