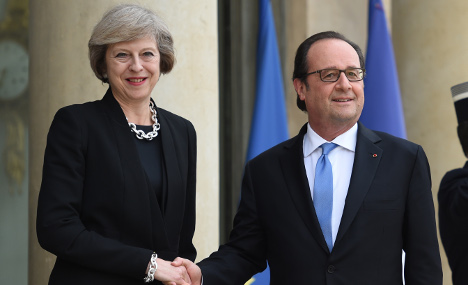 “First we must begin discussions on the modalities of the withdrawal, especially on the rights of citizens and the obligations arising from the commitments that the United Kingdom has made,” Hollande said.

“On the basis of what progress is made, we could open discussions on the framework of the future relations between the United Kingdom and the European Union,” he added.

Shortly after May had triggered Article 50 on Wednesday signalling the start of the EU divorce proceedings Merkel fired a warning saying the UK must first “disentangle” itself from Europe before looking towards the future relationship.

It suggested a rocky road lies ahead during the two years years of fraught negotiations that will soon begin in earnest.

France's stance towards Brexit could of course change when it elects a new president in May. The far-right candidate Marine Le Pen also aims to take France out of the EU if she cannot secure a return of significant powers and sovereignty from Brussels.

Centrist Emmanuel Macron said on Wednesday that he did not want to punish the British people for leaving the EU, but his concern was to protect the interests of the EU.

On Thursday Theresa May penned an open letter to the French people and the citizens of other European countries in a bid to ease their worries about Britain's stance towards Europe.

The letter was published in the Le Parisien newspaper and attempted to reassure the French that Britain does not want to harm France or any other country in the EU by leaving the bloc.

“Our referendum was, in our view, a vote to re-establish our national self-determination. We are leaving the European Union, but we are not leaving Europe—and we want to remain partners and strong allies of France and of all our friends on the Continent,” May wrote.

“In fact, in the beginning of this month, the Duke and Duchess of Cambridge were warmly welcomed in Paris, where they launched a new campaign — the Neighbours — aimed specifically at celebrating the longstanding friendship between our two nations.

“As our closest friend and neighbour, we hope after our departure to establish a close and special relationship with all the countries in the European Union. This unique partnership must be translated into co-operation on economic issues and on security, because that is in the best interest of Britain, France, the EU and the entire world.”