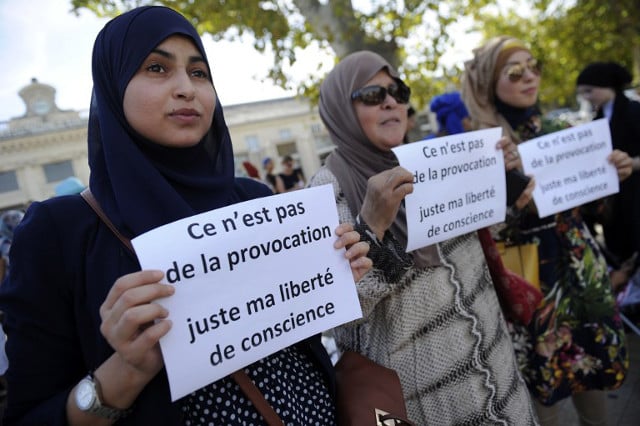 "It's not provocation, it's just my freedom of conscience". Muslim women in headscarves march against Islamophobia in France. Photo: AFP
The survey, carried out by the National Consultative Commission on Human Rights (CNCDH), revealed on Thursday the French were more tolerant to minorities compared to previous years.
The annual survey by the rights commission linked to the government is carried out to get an idea of levels of racism, xenophobia and intolerance in the country.
After the studies of the last three years suggested levels of racist acts were on the rise, the 2017 survey has shown a decrease.
“Paradoxically, despite the extremely tense context of the tragic terror attacks, we can see the continuation of an appeasement and an openness,” the report read.
“Despite what you may think, fear of terrorism has created more national cohesion than it has demolished.”
“Racist comments and behaviour is being deemed to be more intolerable by the French.”
Indeed, the stats show that the number of reported acts of anti-Semitism and Islamophobia dropped 45 percent in 2016, compared to the previous year – in which they'd skyrocketed by 22 percent.
The group said that there were 1,125 such incidents in 2016, compared to 2,034 in 2015, which was the highest number since the surveys began.
Islamophobic acts dropped 58 percent from 2015 to 2016, with 182 acts reported over the year.
Anti-Semitic acts dropped 58.5 percent over the same period, with 335 acts reported compared to 808 in 2015. Graffiti at a prayer room in Corsica, following a blaze which was alleged to have been a racist attack in April. It says “out with Arabs, See you Soon”. Photo: AFP
The report suggested that the drops were due, in part, to the decision taken after the Paris terror attack of January 2015, to station soldiers outside “sensitive” areas like mosques, synagogues Jewish schools.
Despite the drop in reported acts of racism, the president of the CNCDH, Christine Lazerges, noted that the stats only showed the tip of the iceberg.
“It's estimated that only 6 percent of racist abuse is actually reported to the authorities, and only 3 percent is registered as a complaint,” she told the AFP.
The French, meanwhile, appear to becoming more tolerant towards people of different races for the fourth year in a row.
Indeed, the group's index of tolerance, which aims to provide an overall look at levels of racial tolerance via the survey responses, showed that France is currently at a near-record high level of acceptance since the surveys began in 2000. Meanwhile, 54 percent of French people consider themselves “not racist at all”, compared to 43 percent in 2014 – with the new score marking another record high since the survey began 17 years ago.
The survey also noted that immigration wasn't even a primary concern for the French, with just 3.8 percent of respondents saying it was their “main worry”. It was unemployment that came out on top at 21 percent, followed by terrorism at 18 percent.
Despite the improvements, there are still divisions between whom the French are actually tolerant towards.
“Jewish people, the black community, and Asians are the minorities remain the minorities that are the best accepted,” the report read.
“Apart from the ROma community, it is the Muslims who are the least accepted.”
The study showed some 46 percent of French people thought Islam was a threat to French identity.
Certain Islamic religious practices also provoked negative attitudes with some 58 percent of respondents saying they were against the wearing of the headscarf. However that reflects a drop of 22 percent on the previous year.
There was also a drop in negative attitudes towards halal food and Ramadan and some 79 percent of French people believe Muslims should be able to practice their religion in “good conditions”, albeit 59 percent opposed the idea of “facilitating the practice of Muslim worship in France”.
Some 59 percent of French people were against the wearing of the Muslim swimsuit known as the burkini, which was banned by several French towns last summer before being overturned amid widespread outrage. But it was the Roma community who provoked the most hostile attitudes.
The survey also found that 54 percent of respondents thought that the members of the Roma community in France “didn't want to integrate”, compared with 77 percent who said the same thing in the previous year.
The report authors recommended that if things are to continue to get better, the government needs to improve education for children on the matter from their very first years of school.
“We also need to fight against any kind of hierarchy when it comes to the victims,” the group's president Lazerges said.
“Authorities must condemn anti-Semitism, Islamophobia, sexism and homophobia all in the same way.”
“Paradoxically, despite the extremely tense context of the tragic terror attacks, we can see the continuation of an appeasement and an openness,” the report read.
“Despite what you may think, fear of terrorism has created more national cohesion than it has demolished.”
“Racist comments and behaviour is being deemed to be more intolerable by the French.”