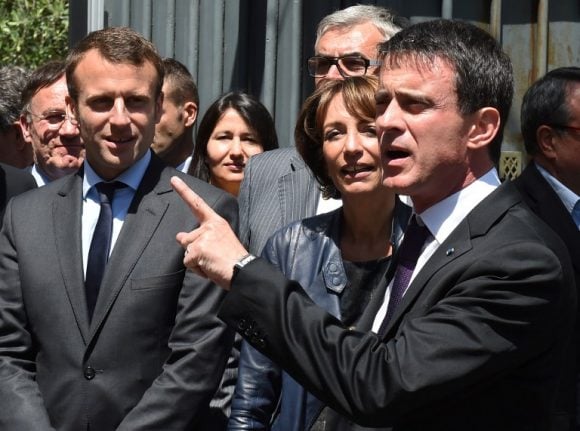 Asked on French television if he would vote for Macron, 39 and a former economy minister, Valls said: “Yes, because I think you should not take any risks for the Republic. So, I will vote for Emmanuel Macron,” who is predicted to face far-right leader Marine Le Pen in the second round run-off.

The endorsement comes as a boost for Macron, who left Valls's Socialist government to form his own political movement that he says is “neither right nor left.”

Macron immediately “thanked” Valls for his support but stressed he aimed to “renew the faces” in French politics, as polls show voters are fed up with the political elite.

He stressed that he would not be employing Manuel Valls as his prime minister if he became president.

The decision of Valls to endorse Macron will likely be seen with fury by the official Socialist candidate Benoit Hamon, who defeated Valls in a left-wing primary.

Several Socialist party bigwigs blasted the former PM's decision to back Macron as “shameful” and “without honour”.

Hamon was already infuriated by the decision of Defence Minister Jean-Yves Le Drian to announce his support for Macron and other Socialist ministers and MPs have already jumped on board Macron's campaign.

Macron is vowing to be “neither of the left nor the right” but his critics on the right call him “François Hollande's heir”.

Given how unpopular Hollande has been in the polls, and indeed Manuel Valls, Macron may see their support as a poisoned gift.

The candidates from the traditional left and right of the French political spectrum have seen their campaigns upended by the youthful Macron — seen as a fresh face in staid French politics — and Le Pen.

On the right, Francois Fillon from the Les Republicains party has seen his chances founder on a fake jobs scandal. He is facing charges he misused public funds with payments totalling 680,000 euros ($739,000) to his Welsh-born wife.

On Tuesday, Fillon's wife was charged with complicity in the abuse of public funds in the scandal that has engulfed her husband's campaign.

Polls show that Le Pen and Macron are the two most likely candidates to progress to the second-round run-off on May 7, where Macron is predicted to win by about 20 percentage points.

However, given the unpredictable nature of the campaign so far and previous electoral shocks in Britain and the United States, analysts caution against taking anything for granted.