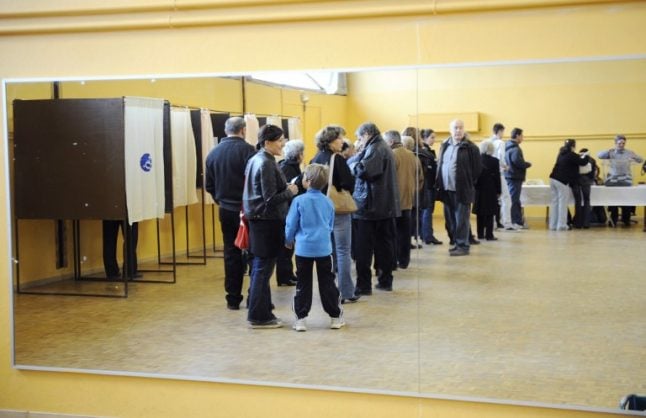 Photo: AFP
Having a flutter on the horses in his local bar, Eric Belouet picks his favourites without hesitation. But when it comes to France's presidential election, he can't make up his mind.
“Really, I can't,” said the 59-year-old, his eyes on the TV screen broadcasting the races. “I'm on the right. But for Francois Fillon, it's over.”
Belouet, a former funeral goods salesman who lives in the little town of La Ferte-Saint-Aubin in central France, said “the door had been wide open” for Fillon to become president when the country votes in the two-round election on April 23 and May 7.
But that was before Fillon's campaign was rocked by multiple scandals over expenses and conflicts of interest, including allegations that he paid his wife for years as a parliamentary assistant with little evidence that she did any work.
Unable to forgive Fillon, Belouet finds himself among the 40 percent of voters who have yet to decide how they'll vote with less than a month to go — or even if they'll show up on election day at all.
It is the highest rate of indecision France has ever seen at this point in a presidential campaign, and adds yet another element of uncertainty to one of the most unpredictable elections in living memory.
For Anne Jadot, a political science professor at the University of Lorraine, it is the string of scandals and surprises in the campaign so far that have left so many voters on the fence.
“This has created a lot of uncertainty and unexpected developments, so we're talking less about the issues and policies,” Jadot told AFP.
Going fishing
La Ferte-Saint-Aubin was divided at the last election in 2012, voting narrowly for rightwinger Nicolas Sarkozy ahead of the eventual winner Francois Hollande.
Five years on, many in the quiet red-brick town of 7,400 people, at the edge of the hunting forests of Solognes, could hardly be bothered with politics in this election cycle.
“At the outdoor market, only one person in 20 talks to me about the presidential election,” says Constance de Pelichy, the town's conservative mayor.
“It's worrying, because that shows a lack of interest.”
France endured many months of speculation before knowing who was actually running for president.
Hollande held off until December to announce he would step down, forgoing a run for re-election after five difficult years at the helm.
It then took until late January, after a two-round primary, for Benoit Hamon to emerge as the Socialists' candidate.
On the right meanwhile, Fillon suffered weeks of pressure to abandon his presidential bid because of the fake jobs scandal, but he has insisted on staying in the race, even after being formally charged with misuse of public funds.
“There's major confusion,” sighed 65-year-old Jacques Drouet as he sat in the 1960s-style bar in La Ferte-Saint-Aubin.
“We're trapped between voting with our hearts and voting tactically,” said the former trade unionist, who usually votes on the left.
The typical election scenario is for the French to vote for their favourite candidate in the first round before trying to eliminate their least favourite in the second.
Drouet's ideas are closest to Hamon's — but he's considering breaking with tradition and voting for centrist Emmanuel Macron even in the first round, hoping to minimise far-right leader Marine Le Pen's chances of making it into the run-off, as polls predict she will.
For many, the most dramatic example of tactical voting was in 2002, when Le Pen's father Jean-Marie Le Pen rocked the political establishment by reaching the runoff. In that second round, voters of various political stripes reluctantly got behind conservative candidate Jacques Chirac to block the far right.
This time, the major remaining unknown is who will face Marine Le Pen. Fillon started the campaign as her most obvious rival, but the scandals have battered his ratings. Polls predict that Le Pen is most likely to square off against Macron,  formerly seen as an underdog, at the May 7 run-off vote.
But if her opponent is Fillon, Drouet said: “I'd leave my ballot blank as things stand now.”
Other undecided voters are planning on simply staying away on election day, meaning abstention rates could be high — perhaps beating the 20 percent who abstained in 2012.
Eric Belouet is contemplating doing something else on April 23 instead of heading to the ballot box — going fishing, perhaps, though not even that is a certainty.
“It'll depend on the weather,” he said.