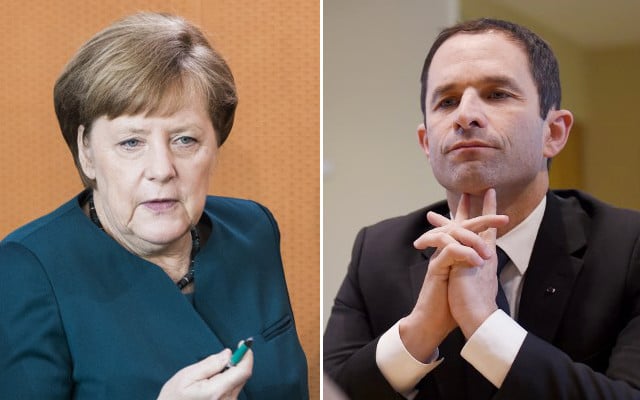 Photo: AFP
During a one-day visit, Hamon met the German leader, who has said she would speak with any of the mainstream candidates in the French race ahead of next month's first round — excluding far-right contender Marine Le Pen.
Hamon also met Merkel's Social Democratic (SPD) challenger in Germany's September general election, Martin Schulz, who offered his backing.
Following the Merkel meeting, Hamon told reporters that she had listened to his proposal to replace the Eurogroup of eurozone finance ministers with an assembly of deputies from national parliaments and the European Parliament.
The new body would have decision-making powers over budgets and the harmonisation of fiscal and social policies in the 19 countries using the euro.
“The chancellor told me about the reservations she had in terms of the legal foundation and as far as the political difficulty of implementing a proposal like this but did not close the door to the discussion, which I see as positive,” he said.
Merkel, who has in recent months sat down with French candidates Francois Fillon and the current frontrunner in the race, independent centrist Emmanuel Macron, did not comment on the talks in keeping with protocol.
However Schulz, the former European Parliament president, told reporters that Hamon had the support of Europe's socialist parties including his SPD for the election.
“I have long wished Benoit Hamon success in the presidential race in France,” he said.
Hamon has been sharply critical in the past of Merkel's drive for budgetary discipline in the eurozone and her perceived political dominance in it.
The leftwing former education minister has captured headlines with his proposal to pay everyone in France a so-called “basic income” of around €750 ($800) a month, a costly and radical reform of state spending.
Polls currently show that Macron, who professes to be neither left nor right, has a slim lead over Le Pen in the run-up to the April 23 first round of the French vote.