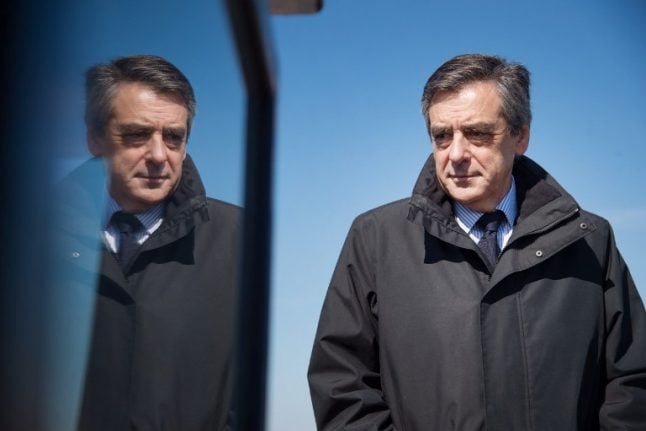 Photo: AFP
“I have to say I have taken part in a few elections but I have never seen an executive, just days out from the election, clinging on to its privileges” and influence, former prime minister Fillon told a rally in the western city of Nantes.
Fillon, 63, is facing charges he misused public funds with payments totalling €680,000 ($739,000) to his Welsh-born wife Penelope for an alleged fake parliamentary job between 1986 and 2013.
The allegations have shattered his earlier status as favourite to win the keys to the Elysee Palace.
Last week, Fillon accused outgoing Socialist President Francois Hollande of plotting his downfall by orchestrating leaks over his financial probity, which Hollande denied.
Fillon of the conservative Republicans party is likely the only one of the main candidates who could marshall a parliamentary majority but the opinion polls show him not making it to the May 7 runoff.
He told his followers in Nantes the establishment was out to finish him even before the April 23 first round of voting.
“Yes, they have dared call for the elimination, even before the vote, of the country's main political family,” Fillon said, referring to the traditional right he represents against main rivals Marine Le Pen of the far-right National Front and  former economy minister Emmanuel Macron, who professes to be a centrist, neither left nor right.
Latest polls show that Macron, 39, would rout the 48-year-old Le Pen, who likewise has tapped into a deep well of voter discontent with the political establishment, in the decisive second round vote.
'Wall Street and Woodstock'
Fillon, who continued to insist he was undergoing trial by media, said he was “the only one who can produce a stable majority to undertake the reforms which the country so needs.”
Ally and western Vendee regional council president Bruno Retailleau, also a French senator, praised Fillon as a “real fighter,” while dismissing  Macron as the spiritual heir of Hollande and an amalgam of “Wall Street and Woodstock.”
Even so, an Odoxa poll showed voters prefer Macron as a personality — as well as hard left candidate Jean-Luc Melenchon, to Fillon.
Macron was up eight percentage points on his February score with a 45 percent positive rating while Melenchon stood at 40 percent after the poll commissioned by L'Express magazine, regional newspapers and broadcaster France Inter asked voters who they found most sympathetic.
Le Pen scored just 29 percent but Fillon fared even worse with 19 percent, down three percentage points.
The 1,005-strong sample for the poll had further bad news with 39 percent finding Macron was running the best campaign to 24 percent for Melenchon, 20 for Le Pen and only 8 percent for Fillon.
However, according to the latest polls on voter intentions, millions of voters remain undecided and almost half may change their minds.
But they also show that whether Le Pen faces Macron or Fillon in the runoff she would lose by a large margin.