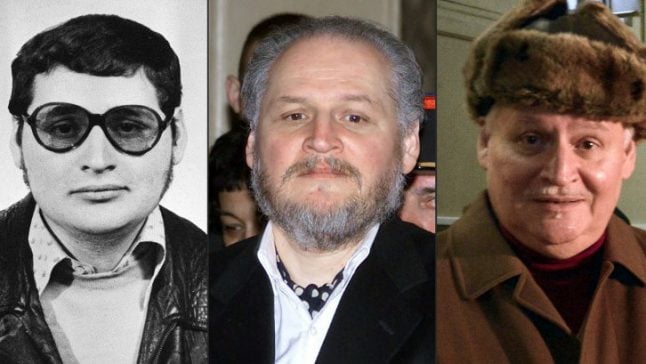 Carlos the Jackal through the years. Photo: AFP
Prosecutor Remi Crosson du Cormier had told the court in Paris on Monday that “all evidence gathered in this investigation points to Carlos” while admitting that investigators had found no DNA, fingerprints or CCTV evidence from the grenade attack on a store in the French capital that left two dead and 34 injured on September 15, 1974.
The flamboyant white-haired defendant, wearing a black shirt and jacket with a trademark kerchief in the breast pocket, blew kisses at supporters at the start of the hearing, taking the stand to denounce the “absurdity of a trial held 43 years after the fact”.
Lawyers for the 67-year-old Venezuela native, whose real name is Ilich Ramirez Sanchez, had derided the two-week trial as “judicial palaeontology”.
Defence lawyer Francis Vuillemin, calling for an acquittal, said a conviction would only feed the cult status of his client, who has been in prison in France since he was arrested by French elite police in the Sudanese capital Khartoum in 1994.
“If you convict him, he wins, if you acquit him, he loses,” Vuillemin told the three-judge panel. “So acquit Carlos and he will take it out on his lawyers.”
Carlos was the world's most wanted fugitive in the 1970s and early 1980s, when Europe was repeatedly targeted by groups sympathetic to the Palestinian cause.
He boasted at the start of the trial: “No one in the Palestinian resistance has executed more people than I have.”
'You don't snitch'
He has claimed personal responsibility for 80 deaths but repeatedly denied responsibility for the Paris attack on the Drugstore Publicis store in the upmarket Left Bank district of Saint-Germain.
Carlos argued that he should not be required to testify against himself and said he faced death if he divulged operational information.
On Tuesday he returned to his “Palestinian resistance” rulebook, saying: “You don't snitch, and you don't cooperate with a court you don't recognise.”
Little known at the time of the Drugstore Publicis attack, Carlos rose to international notoriety the following year when his commando group burst into a meeting of the powerful OPEC oil cartel in Vienna, taking 11 people hostage. Three people were killed.
Carlos is serving life sentences for the murders of two policemen in Paris in 1975 and of a former comrade who betrayed him.
He was also found guilty of four bombings in Paris and Marseille in 1982 and 1983, some targeting trains, which killed a total of 11 people and injured nearly 150.
He was dubbed “Carlos the Jackal” by the press when he was giving international security services the slip while on the run.
The nickname came from a fictional terrorist in the 1971 Frederick Forsyth novel, “The Day of the Jackal”, which was turned into a popular film.
Georges Holleaux, a lawyer representing the two widows of the men killed and 16 other people affected by the attacks, said before the trial that his clients relished the chance of seeing Carlos face justice.