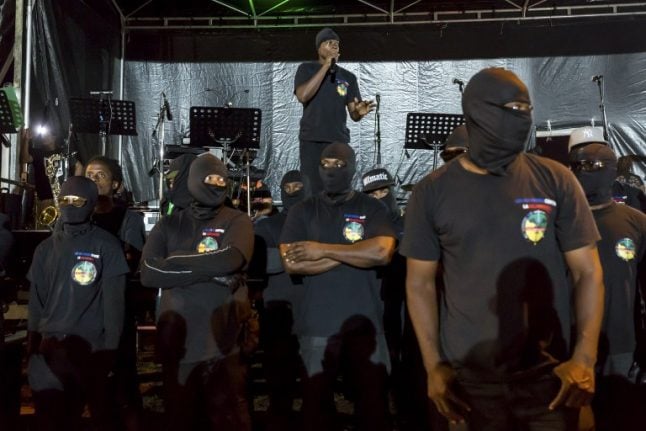 Masked men guard in French Guiana at a meeting in response to several workers' unions demand for better pay, health coverage and public safety. Photo: AFP
The department was paralysed by a general strike on Monday that closed schools and shops and stoked fears of further instability in the French overseas territory.
The French government appealed for calm in the South American territory which has been gripped by protests since last week over security and the state of the economy.
“The first priority is the fight against insecurity,” French President Francois Hollande said of the crisis that has elbowed its way into the country's presidential election campaign.
Several of the candidates running for the presidency in France have pounced on the crisis, which flared just weeks before the first round of voting on April 23.
“This situation is the consequence of the failed policies of Francois Hollande,” said conservative candidate Francois Fillon.
Marine Le Pen, the far-right National Front candidate, condemned what she called a “cruel minimum service” delivered by French governments to Guiana.
Centrist Emmanuel Macron made headlines with his own thoughts on the matter, due to his geographical gaffe of calling the territory an island.
“What's been happening in French Guiana over the past few days is serious,” he told journalists.
“My first response is a call for calm, because blocking the airport runways and takeoffs – and sometimes even blocking off the function of the island itself is not the response to the situation.” Barricades have been erected on roads since last week, snarling traffic, and the US State Department has warned travellers to stay away, citing the risk of violence.
The barriers were temporarily lifted on Sunday and some stores opened so people could stock up on food and other supplies before the strike began, leading to long queues at petrol stations.
Air France and Air Caraibes cancelled all flights into Guiana and schools and universities were closed after 37 labour unions launched the strikes demanding a “Marshall Plan” to improve public services and security.
The protests also led to the postponement of an Arianespace rocket launch at Europe's Guiana Space Centre in Kourou.
French Prime Minister Bernard Cazeneuve said a delegation of ministers would be sent to Guiana before the end of the week if certain conditions were met, without elaborating.
“The situation is tense,” said Ericka Bareigts, the French minister for overseas territories, appealing for calm. 'All we have is plundered'
The French government had previously sent a delegation to negotiate with strikers, but many of the territory's 22 mayors refused to meet the officials, instead demanding that French ministers to come in person.
“This has gone on long enough! All we have is plundered, it's time to recognise the people of Guiana,” a woman at a barricade blocking access to the airport in the capital Cayenne told AFP on Sunday. The “Collective to Get Guiana Moving” has called for better access to health services and electricity, economic development and job creation programmes, and renewed efforts to keep children from dropping out of school.
Guiana, with about 250,000 inhabitants, relies on huge injections of public funds.
“The government must respond rapidly to these requests,” French Environment Minister Segolene Royal said after a recent visit.
A similar revolt gripped French Guiana in 2008 over soaring fuel prices, shutting down schools and the airport.
The strike ended after 11 days, when the government agreed to cut fuel prices.