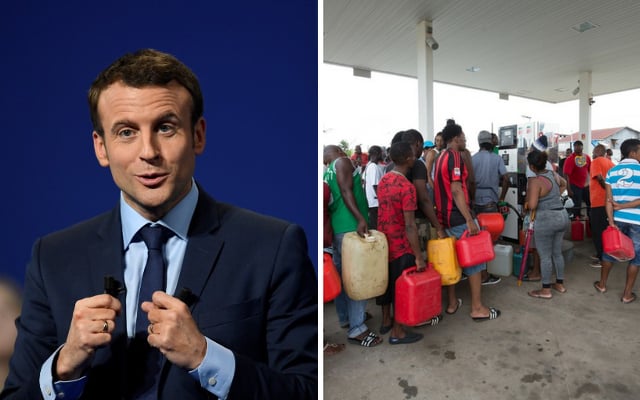 Photo: AFP
Emmanuel Macron made the blunder during a whirlwind tour of France's overseas territories.
“What's been happening in French Guiana over the past few days is serious,” he told journalists, referring to tensions mounting over a general strike scheduled for the French overseas department on Monday.
“My first response is a call for calm, because blocking the airport runways and takeoffs – and sometimes even blocking off the function of the island itself is not the response to the situation.”
The error – in case you missed it – was that French Guiana isn't an island at all but a coastal block of land in the northern reaches of southern America (see map below). While mistaking it for an island might not seem like the gravest sin in the world, don't forget that it's one of France's five overseas territories – and is actually a department of France.
The area, bordering Brazil and Suriname, is actually the second largest region of France.
In other words, the fact that it's not an island is the kind of geographical information that any French person would learn as a child.
Needless to say, the French media didn't let Macron's mistake slip (although none of the reporters in the video seemed to even notice) and it was Macron's gaffe making headlines on Monday instead of the strike.
As for French Guiana itself, the department was largely paralysed on Sunday as tensions mounted on the eve of a major strike which has elbowed its way into France's presidential campaign.
Air France cancelled all flights to the South American territory for Sunday and Monday, when 37 labour unions were to launch a general strike demanding a “Marshall Plan” to improve public services and security. Barricades have been erected on roads since last week, and the US State Department has warned travellers to stay away, citing the risk of violence.
The French government has sent a delegation to negotiate with the strikers, asking them to lay out their demands.
“This has gone on long enough! All we have is plundered, it's time to recognise the people of Guiana,” a woman at the barricade blocking access to the airport at Cayenne, the capital, told AFP on Sunday.
The “Collective to Get Guiana Moving” has called for better access to health services and electricity, economic development and job creation programmes, and renewed efforts to keep children from dropping out of school.
The territory, with about 250,000 inhabitants, relies on huge injections of public funds.
A similar revolt gripped French Guiana in 2008 over soaring fuel prices, shutting down schools and the airport.
The strike ended after 11 days, when the government agreed to cut fuel prices.