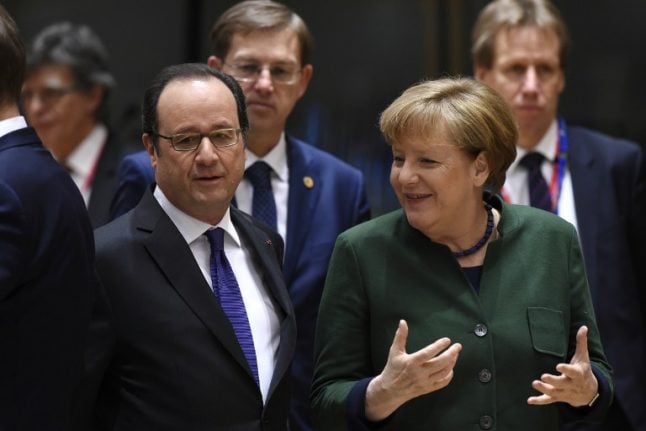 Photo: AFP
British Prime Minister Theresa May, who decided not to attend the bloc's 60th anniversary summit in Rome, is due to formally notify Brussels of Britain's intention to leave on Wednesday, kickstarting up to two years of discussions.
“Some things are not for sale,” German Chancellor Angela Merkel told reporters, saying Britain would not be granted any concessions which undermined the free movement of goods, people, services and capital within the European single market.
French President Francois Hollande said every effort would be made to ensure the divorce was amicable, but also warned that some pain was inevitable.
“It was her (May) who chose not be here and it was the British who chose to take another path but we have to maintain good relations. France is very connected to the UK.”
That said, Hollande reiterated that a country leaving the European Union could not be seen to have benefited from the move.
“We will ensure that (Brexit) does not happen at Europe's detriment, that Britain remains a partner of the union but that, necessarily, it will pay the consequences.”
EU officials suggested a more positive tone could have been set for the start of the negotiations had May opted to come to Rome for Saturday's largely ceremonial proceedings.
“It is a shame she is not here,” a senior European official told AFP.
EU officials expect Britain's permanent representative in Brussels, Tim Barrow, to personally hand the withdrawal letter to European Council President Donald Tusk on Wednesday.
Draft guidelines for the remaining 27's negotiating stance are expected to be approved by ambassadors in Brussels on Friday before they are released, with Tusk and Maltese Prime Minister Joseph Muscat due to discuss them at a press conference in Malta, on the same day.
As one European diplomat noted drily, that is Malta's independence day — “which marks when British tanks and soldiers left the island!”
Url copied to clipboard!