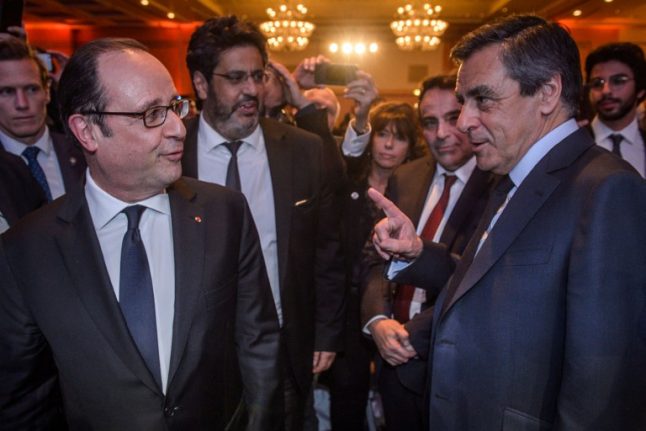 Photo: AFP
“I don't want to enter the electoral debate… but there is a dignity, a responsiblity to respect,” Hollande, a Socialist, told French radio a month ahead of the presidential election. “Fillon is beyond that now.”
Fillon late Thursday accused Hollande of orchestrating media leaks that have dented his image as a scandal-free leader.
“It's been two months that the press had been flinging mud at me,” he told France 2 in a prime-time television interview.
He said that Hollande — who decided in December not to run for re-election — headed a “secret cabinet” that was responsible for explosive revelations, notably about hiring his wife for allegedly fake jobs on the public payroll.
“Listen, there is a cabinet, thankfully, that works,” Hollande said. “You know my position, it has always been for the independence of the judiciary, respect for the presumption of innocence and never to interfere.”
An investigation into the fake jobs scandal that first emerged in the satirical weekly Le Canard Enchaine in January has led to Fillon being charged this month with misuse of public funds.
Though an MP employing a family member is not illegal in France, Fillon's wife Penelope is accused of doing little for the €680,000 ($725,000) she received in salary.
Fillon was the frontrunner in the election before the scandal broke, and now is not expected to get past the first round on April 23.