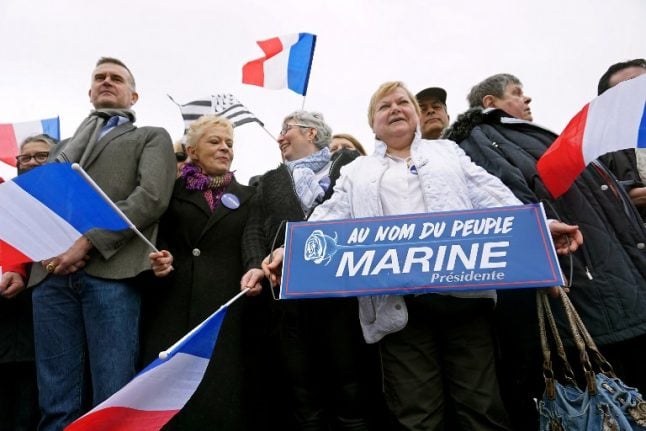 Photo: AFP
Many French people are planning to avoid the polling booths in the upcoming elections, at least according to the most recent polls.
Indeed, the rate of abstention may be as high as 35 percent – which would be a record for France.
For context, the abstention rate was around 20 percent in France's 2012 presidential election, and as low as 16 percent in 2007.
The result of this predicted abstention high means the new president, who as always will need to win over 50 percent of votes in the second round run-off, will almost certainly need to win over fewer voters in total when compared to previous years.
So why the big difference this time?
Philippe Marliere, a professor in French politics at University College London, puts it down to “a mix of apathy and anger”.
“The main reason is that the electorate is fairly unable to relate to any of the candidates, there is a great gap between the expectations of the voters and the programmes of the candidates,” he told The Local.
Indeed, some polls show that of those who plan to vote, just over two in five say they are not yet wedded to any candidate. Emmanuel Macron delivers a speech during a campaign rally in Dijon on March 23rd. Photo: AFP
“It's not that people aren't interested in voting or don't know anything about politics, it's that they haven't found a suitable offer from the candidates,” he said.
“You won't vote for someone if none of the candidates appeal to you or propose anything that you can relate to.”
He noted that certain demographics would be more likely to abstain than others, notably the younger generations, the ethnic minorities, and the unemployed.
Indeed, this was the general mood when The Local recently visited Roubaix in northern France, a former socialist stronghold that's now known as the “abstention capital of France”.
Sylvain Decobecq, a 36-year-old labourer, was among several who said they wouldn't cast a vote in April.
“I just don't think that any of the politicians actually want to do anything for us… I've never seen a president make France any better,” he said.
READ MORE: How France's poorest and richest towns see the election very differently A similar sentiment was expressed when The Local spoke to residents in the immigrant-rich suburbs of Paris, which typically see a higher abstention rate.
“People feel disillusioned because they see neither the left nor the right offering much of a change. That's the problem. Politicians are seen as unable to do much for people's daily lives,” said 47-year-old Gilles Rivet in Aulnay-sous-Bois.
The fact that many of the familiar faces of the political spectrum are out of the race – including Nicolas Sarkozy, Alain Juppé, and Manuel Valls – may also drive people to abstention as many voters just won't be able to relate to the candidates.
Political expert Philippe Marliere said that if the polls were correct and the mainstream parties were eliminated in the first round – leaving only the centrist Emmanuel Macron and far-right Marine Le Pen – then it could mean an even more inflated abstention rate. As to who will benefit the most from abstention, Marliere said it's tough to predict without qualitative information on who actually wasn't voting.
For example, abstention from the left would play into Le Pen's hands, he said, because traditionally leftist voters would likely abstain rather than cast a vote for liberal Macron or the scandal-hit Fillon.
Similarly, those on the right may prefer to not vote rather than support Macron, or indeed Le Pen.
So who is planning to abstain?
A Cevipof poll last week found that professions with high abstention rates also had a high percentage of Le Pen supporters.
Some 42 percent of labourers said they wouldn't vote at all, while 44 percent of those labourers who were voting picked Le Pen.
There were similarly high numbers among farmers, with 52 percent of those surveyed saying they wouldn't vote – and 35 percent of the voters choosing Le Pen. But by the time France gets its next president, it seems unlikely that the abstention rate will be the crucial factor at the end of the day.
Based on the most conservative assumptions, number crunchers at The Economist found that abstention would need to reach a whopping 60 percent in France for Le Pen to actually win (based solely on her first round voters doing the same in round two).
A more likely scenario, according to Marliere, is that people will actually come out in force in the second round to quash Le Pen's chances of being president. This is exactly what happened in 2002 when Le Pen's father was handsomely beaten in the second round by Jacques Chirac by 82 percent to 18.
“They made a statement, they didn't want Le Pen as president, and that could again be the case now,” he said.
“A large percent of the French people will likely vote against Le Pen in the second round: people who don't want her as president and who think she is dangerous for democracy,” Marliere said.
He added, however, that “the mood had changed” in France since 2002, when Le Pen senior was thrashed in the second round.
“The sort of anger and disillusionment regarding the political establishment is more important now,” he said, adding that people on the left may well abstain rather than vote for Le Pen's competitor.
“I could see them saying 'not this time, we won't do it again'.”
France goes to the polls on April 23rd. The second round will be held on May 7th.