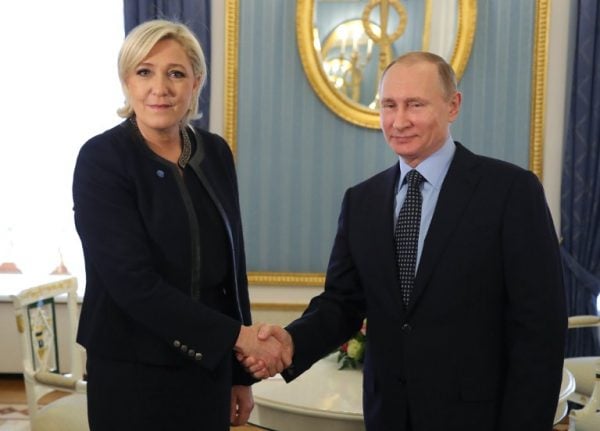 Photo: AFP
“We by no means want to influence the current events but we reserve the right to communicate with all representatives of all political forces of the country, as do our partners in Europe and the United States for example,” Interfax news agency quoted Putin as telling Le Pen.
“I know that you represent quite a fast-developing spectrum of European political forces.”
The meeting between Putin and National Front party leader Le Pen — their first, according to Kremlin spokesman Dmitry Peskov — comes less than a month ahead of the French election, with the first round set to take place on April 23.
Le Pen is among European politicians who have called for closer ties with Putin and approved of Moscow's annexation of Crimea from Ukraine in 2014.
She has visited Moscow on several occasions, enjoying positive Russian state media coverage.
Moscow has offered praise for rightwing and eurosceptic politicians in Europe — with Putin cementing closer ties with Hungary's Prime Minister Viktor Orban, for example, in Budapest last month.
Peskov told reporters that Putin's meeting with Le Pen and his encounters with other representatives of foreign opposition forces were “normal practice”.
“Russia is ready to stay in contact with representatives of all political forces, with the current leadership, with representatives of the opposition,” Peskov said.
He added it was “important” for Moscow to exchange with political forces that advocate “the need to engage in bilateral dialogue to find solutions to existing problems”.
It is rare, however, for Putin to meet a foreign presidential candidate so close to an election. Russian loan
Friday's encounter lasted an hour and a half, Le Pen advisor Ludovic de Danne wrote on Twitter.
The meeting was not announced this week when the Russian parliament confirmed that she would be visiting Moscow on Friday to meet with lawmakers.
Earlier Friday, Le Pen met Russian parliamentary speaker Vyacheslav Volodin, calling for increasing cooperation with Russia in the fight against “terrorism”.
In 2014, the National Front received a nine-million-euro ($9.7 million) loan from a Russian commercial bank that later collapsed.
The party on Friday dismissed the possibility of seeking further funding from a Russian bank.
Le Pen has sought to capitalise on the anti-globalisation anger reflected by Brexit and the election of Donald Trump as US president — both votes that were welcomed by the Kremlin.
Russian Foreign Minister Sergei Lavrov on Thursday said Le Pen was not a “populist” but a “realist or anti-globalist” figure.