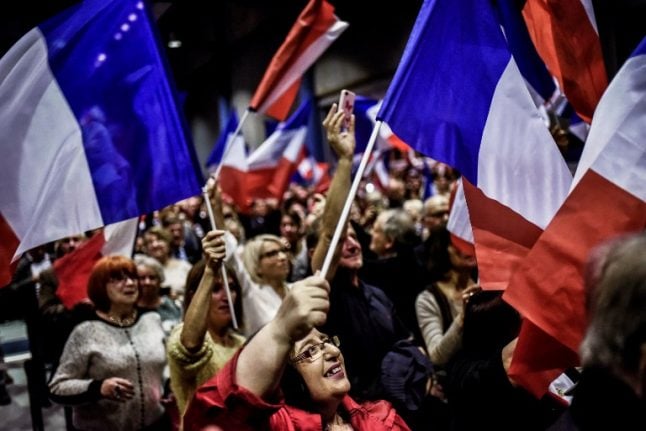 Photo: AFP
From a fisherwoman in Brittany to a CEO near Paris, voters answered the following question: “What should be the priorities of the next French president?”
Help the young
Mouslimati Boina-Mze, 24, training at a specialised college for young people without high school diplomas in Marseille, southern France:
“I want the new president to help young people find work easily. It's hard, it really is. Today, even if you leave school with qualifications, you can only find a job that is badly paid or demotivating.
“What the new president needs to do is improve information for young people. Many people don't even know there are local training centres for them.”
Note: In 2016, France's unemployment rate for the under-25s reached 24 percent. France's unemployment office, Pole Emploi. Photo: AFP
Power to the people
Adam Mersit, 20, studying physics and chemistry at Rennes university in western France:
“The most important thing is that the president gives power back to the people, because we're no longer being heard. Even when we protest, we're not listened to.
“I want the next president to repeal the (new) labour law. I think it's a bad idea that everything is sorted out internally in companies because that could lead to pressure being put on employees.
“I also want the president to hold referendums and get the French interested in politics. There is not a single young person in the National Assembly despite the fact that people have a very different view of the world depending on their age. I don't see why someone of 30 is less important than a 50-year-old.”
Note: In July 2016, President Francois Hollande's government pushed through controversial labour reforms loosening France's rigid employment laws, setting off violent protests.
Cleaner politics
Marie Rouffet, 47, mother of four, fisherwoman from Le Guilvinec, northwest France, training to be a mechanic:
“I don't have any expectations anymore. We just go from disappointment to disappointment. Doesn't matter if they are from theright-wing, the left-wing, the centre, sideways, up, down, it's rotten to the core and the higher up the chain of power you go, the more corrupt you are and the more money you're siphoning off.
“What's more, the people that spit out our laws don't know the first thing about boats or fish. They've probably never been to sea. So the presidential election campaign doesn't interest me. Like all my fishing colleagues, we're just interested in fishing campaigns.
“Doesn't matter to me who's president, nothing will stop me fishing in an industry that still has a future.”
End police brutality
Mohamed Tria, 50, married father of four, businessman and manager of a lower-league football team in the central city of Lyon:
“I want the next president to introduce statistics on police brutality, in order to highlight a problem that is an important factor behind violence in the suburbs. Because it is unconscionable that members of the security forces, who are supposed to be protecting us, could be contributing to the violence.
“That includes racial profiling during identity checks, which starts at 14-15 years old. I was a victim of this myself 40 years ago, which shows it's a real issue that runs deep and which youngsters in these neighbourhoods are growing up with, unfortunately.”
Note: France has seen a recent string of protests against police brutality after a 22-year-old black youth worker was allegedly raped with a police baton. A sign reads “Fuck the police” in Aulnay-sous-Bois, in the suburbs of Paris. Photo: AFP
Avoid new migrant crisis
Jean-Loup Tiesset, 54, restaurant owner in Calais, northern France, near the former migrant camp nicknamed “The Jungle”:
“The migrant crisis caused a lot of human, social and financial difficulties for Calais residents. The president should get in contact with neighbouring countries to ensure that the people of Calais no longer find themselves in the situation they have been in for the past 10 years.
“It's not right that British immigration checks take place on our soil. It's up to England to welcome migrants and manage the migrant flow that the country attracts.”
Note: In 2015 and 2016, Europe faced the worst refugee crisis since World War II. More than one million migrants crossed the Mediterranean, escaping war and insecurity in their home countries. France registered around 180,000 asylum seeker requests in the same period. Migrants at the Grande-Synthe camp in northern France. Photo: AFP
Stop decline of hospitals
Nathalie Niort, 39, mother of three, nurse in a cardiology unit in Puy-de-Dome, central France:
“That he stops the decline in hospitals. We're on the verge of a catastrophe, we can't keep selling off health like this. We have to stop staff cuts. We don't have enough staff. When things are going well, it's OK but when you're on your own and you have several patients that need to be resuscitated, whom do you choose?
“We're on the verge of institutional mistreatment: we're doing back-to-back treatments, taking blood. We're shattered and we are trying not to make mistakes in our dosages. When we get home, we feel we haven't really looked after our patients properly. We're putting the patient and the carer in danger.”
Note: France's nurses have taken to the streets in recent months to protest against a shortage of doctors and the growing malaise of healthcare providers. Last summer, five caregivers committed suicide.
Restore farmers' place in society
Sylvie Colas, 54, married mother of three, organic poultry farmer in Lectoure, southwest France:
“He ought to restore real farmers to their rightful place in society. In 15  years, we went from 200 to 100 in Lectoure. We have rural areas without farmers. People cram into cities even when rural areas have the potential to welcome them.
“The model of subsidies has to change to respond to farmers' needs instead of using it to produce more, as it is the case today. The next president must stop listening to the food industry and prick up his ears to producers and consumers.
“He needs to ask himself what's healthy — the diet of tomorrow must be organic and create jobs. A farmer can create work for four or five people.”
Note: France is Europe's agricultural powerhouse, while many French farmers struggle to make ends meet. Last year, half of the country's farmers earned less than €350 ($378) a month, far below the national poverty threshold of 800 euros.
Environmental commitments
Gildas Lamette, 39, cafe waiter in Rennes, northwest France:
“He or she must set an example. There can't be any scandals resurfacing as is the case now with (conservative candidate) Francois Fillon and (Marine Le Pen's far-right) National Front.
“The president must remain independent from lobbies as much as possible. What seems most important to me is making environmental commitments because the environment will lead to new technologies, new jobs, and added value.
“I hope the new president will be clear-headed and shut down nuclear plants, which (President) Francois Hollande was not able to do. Our commitment, as citizens, and our future on this planet are at stake.”
Note: France is strongly dependent on nuclear power which accounts for 75 percent of the country's electricity.
Boost innovation
Eric Laurent, 48, CEO of a company that makes drones and employs seven people. Married with two children, he lives in Rambouillet, outside Paris:
“He needs to be pragmatic and make our lives easier. Subsidies for innovation should actually go to innovative projects and they should get to them fast.
“In France, we have very good ideas but almost all start-ups end up getting sold to foreign companies. We are good at first, when it comes to designing the engine and engaging first gear, but when it's time to shift to second gear, it's so difficult… They might as well remove some charges and let us move forward.
“To compensate, we could get rid of the thousands of different subsidies that are too complicated for small businesses to request anyway. In the end, 80 percent of tax credits go to big companies that don't need it.”