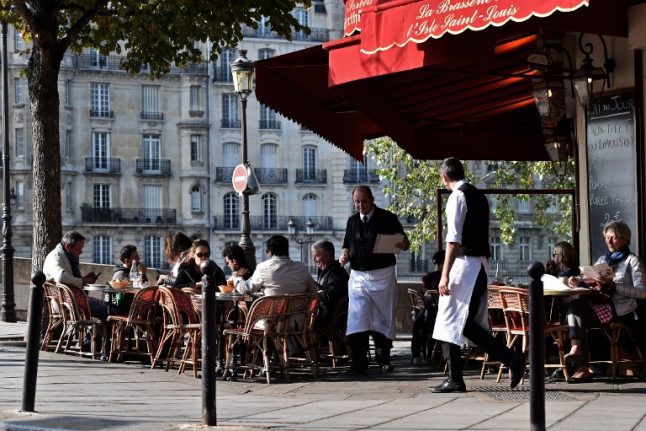 All photos: AFP
1. Summer in the city
Sorry, but Paris just does sunny days better. During the summer, Parisians flock to terraces outside brasseries to catch some rays and gossip with friends over a bottle of rosé.
They spend long evenings picnicking and playing pétanque by the canals. There are summer festivals like Fête de la Musique and Paris Plages, when stretches of the banks of the Seine are transformed with sand and deckchairs into something resembling a beach on the Côte d’Azur. Photo: AFP
2. Romance
“Paris loves lovers,” sang Fred Astaire, and it’s not hard to see why. For marriage proposals and romantic weekends away, Paris is at the top of everyone’s list.
Exquisite architecture is everywhere you turn, from the softly lit Louvre at night, to the views from the Pont des Arts and the winding cobblestone streets of Montmartre. As one reader pointed out: “I don't know that London could ever match the old-world, romantic ambiance of Paris.” 3. Neighbourhood feel
Paris still has that “neighbourhood” feel. Everyone has their “spot” for everything and shopkeepers are pillars of the community, in a way that London, with its massive geographic spread, doesn’t have.
You've got your local butchers, bakers, and cheese sellers – all within walking distance anywhere in Paris – even in what appear to be the most tourist-y areas of the city. London, on the other hand, is swamped with Tesco's and Gregg's. Rue Montorgueil. Photo: AFP
4. Cost of living
Paris has a bad reputation as an expensive city, but compared to London, many of our readers say that the French capital is much more budget-friendly. As one of our readers pointed out, “A studio in central London will set you back about £2,000 a month, whereas in Paris you can spend half that and be living in the 1st or 2nd arrondissement”.
A Metro ticket is half the price of a Tube ticket and there are numerous discounts, especially for under-30’s, at concerts, museums and theatres. 5. Safety
For good or for ill, the layout of the French capital means that most crime and poverty is constrained to the suburban “banlieues”. This means residents and visitors in Paris itself feel safer and freer to walk around and take public transport.
London on a weekend night, on the other hand “is either a snapshot of anarchy (with violent youths fighting and accosting passersby), or one of a Police State with CCTV cameras every few feet,” as one of our readers said on Facebook.
6. High-end shopping
Paris is one of the centres of the fashion world. Whilst Vogue editor Anna Wintour often skips London Fashion Week, she is always front row at the Paris fashion event of the year.
As François Navarro, from tourism committee CRT, said: “London might have Harrod's, but it doesn't compare with the Galeries Lafayette [department store]. London is for sales, Paris is for shopping. There's a big difference between the two.” 7. The Metro
It might have some ridiculously long station names – “Ecole Vétérinaire de Maisons-Alfort” is a favourite – but the Paris Metro is fast, reliable and makes for a painless morning commute, unlike the Tube with its frequent breakdowns and disruptions.
Trains roll in and out of Metro stations every 2-4 minutes and at weekends it conveniently runs until 2am. What's more, a monthly ticket will only set you back €73 for unlimited travel anywhere, whereas in London the monthly cost is €210 (£181.70) for zones 1-4 alone. 8. Late night life
Paris is much more Mediterranean than London in its circadian rhythms. The French capital has restaurants still serving at 11pm, whereas in London you could be turned away after 9.30pm. Many bars are open past midnight on a weeknight, let alone the weekend and you'll be able to find a seat, rather than be constrained to verticle drinking. 9. Restaurants
This one is a no-brainer. Although Paris has its fast food giants like “McDo” the French capital is also packed full of independently run restaurants. The same simply cannot be said of the British capital, where you can't walk for ten minutes without seeing a Nandos, a Pizza Express or a Wahaca. “Of course London also has some good restaurants, but that's because French chefs work in them,” said François Navarro from the Paris regional tourism committee CRT. 10. Beautiful people
This one might sting, but it has to be said. The old myth about toothless, Dickensian Londoners is obviously not true, but anyone who's ever been to Paris would have to agree – Parisian men and women really care about their appearance. The carefully-chosen outfits, delicately-balanced make-up and perfectly-groomed facial hair. London has its fair share of fine young things too, but there's a certain easy style about all those gorgeous Parisians guys and girls.
Another version of this story was published in 2016