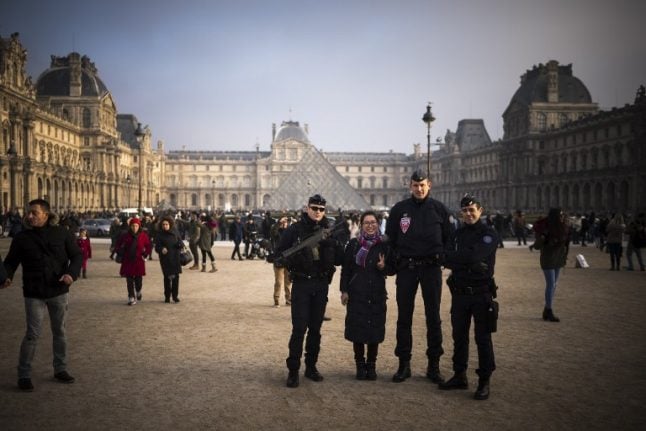 Photo: AFP
It has long been a complaint from many tourists, or at least those that get into a spot of bother, that the Paris police don't speak very good English, but this may all be about to change.
France's Foreign Affairs Minister Jean-Marc Ayrault is expected to announce the creation of a new police brigade that will be specifically tasked with helping tourists in need, according to reports from the Challenges newspaper.
And this means the police will speak more than just French. In fact, they'll have the capability to take down complaints in 16 different languages, according to reports.
They'll work the beat in “the main shopping and cultural areas” of the city, the paper noted, including areas like the Louvre museum and the big department stores.
The police are expected to be highly mobile and able to record statements on the go, rather than having to take tourists in to police stations to take a formal statement. Authorities are no doubt hoping a multi-lingual police force will encourage tourists to come back to France after terror fears have scared many away.
“In total, in 2016, hotel owners in Île-de-France welcomed 1.5 million fewer French and international tourists compared to 2015,” the Regional Tourism Committee reported late last month.
And the countless tourists who've had to deal with French administration following a robbery (or similar) will no doubt welcome a new police brigade for helping people like them.
One of the highest profile crimes against tourists in Paris in recent times saw Kim Kardashian robbed of €9 million in jewels.
However, Kardashian herself seemed fairly impressed with the work of the French police force, taking to Twitter in recent days to hail them.

To the French police, thank you for your incredible hard work.

There have been repeated calls for such a tourist police brigade, notably from the Alliance 46.2 firm, which represents groups that rely on income from tourists. They wrote an open letter in October calling for more police support at tourist zones in Paris.
The tourist group called for a “specific organization in Paris and its suburbs that would allow police to keep an eye on the petty criminals who poison the lives of tourists,” it said.
And it's not just the wealthy tourists who are picked on, with the group noting that Chinese tourists who typically carry around a lot of cash have been targeted by thieves in recent times too.
It's presumed that the group expects an increased police presence would also help to allay tourists' fears given the terror attacks that have rocked Paris and Nice in the last year, leaving hundreds dead.
The group added that such a move shouldn't be considered “out of the ordinary” given that there are 66 million people living in France but 84 million tourists each year.
And the group warned that now was the time to act, predicting a 5-percent drop in tourist figures in 2017 and the potential loss of 30,000 jobs with it.
“The image of France has deeply deteriorated, and it's likely that 2017 will still feel the impact. The recovery may therefore be long.”
Alliance 46.2 brings together many of the leading tourism groups, including Accor Hotels, Disneyland Paris, SNCF, and Galeries Lafayette.
France's tourism sector is worth around 8 percent of the country's GDP and provides jobs for around 2 million people.