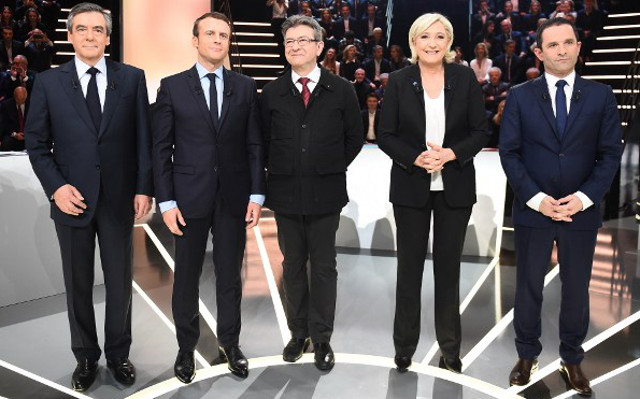 Five of the main runners in France's presidential election race entered the same ring for an eagerly awaited and historic live TV debate on Monday night.

With such a diverse range of potential future presidents brought together for a battle that lasted over three and half hours there were always going to be fireworks.

Le Pen blasted Macron for “speaking for seven minutes without actually saying anything” and Macron slammed Le Pen for “trying to divide the French” over the question of the full body Islamic swimsuit called the burqini.

Fillon mocked Le Pen when she suggested Brexit had been fantastic for the UK. He pointed out that Britain hadn't even left the EU yet.

Hamon had a dig at the other candidates for suggesting his idea for universal income was the only original and really beneficial reform offered by any of them and Jean-Luc Melenchon lived up to his name as a firebrand by taking the fight to all four of his rivals and emerging as many people's winner.

He resented being asked a question about political corruption and transparency, pointing out that only Fillon and Le Pen are facing formal investigations.

In the most unpredictable French presidential race in memory many believed that the live TV debate could be crucial to the chances of the likes of Emmanuel Macron an unproven upstart and Fillon, struggling to move on from the fake jobs scandal that derailed his campaign in January.

So what was the conclusion?

A quick poll of TV viewers taken after the debate showed that in their eyes Macron was the most convincing candidate in the debate ahead of Jean-Luc Melenchon. Although it was only one poll.

A poll of TV spectators suggests Macron was the winner. That has surprised BFMTV's analysts who thought he was disappointing. #LeGrandDebat pic.twitter.com/v9Ayg8XbFb

Macron scored 29 percent of votes on the question of who was the most convincing candidate, ahead of Melenchon on 20 percent.

That surprised many analysts, or at least those on BFM TV, who thought Macron failed to stamp his authority on the debate or leave a lasting impression on viewers.

Most people considered Macron had the most to lose from the live debate given his rise in the polls and volatility of his voters. Given that he was expected to be the main punchbag the En Marche candidate will just be happy to emerge fairly unscathed.

But speaking after the debate Marine Le Pen once again criticised him.

“It was the first time I was in front of him and I take my hat off to him because I have never met anyone who could speak for several minutes without actually putting forward any clear ideas. Totally empty,” she said.

At times, especially when Macron talked of France's place in the world, it felt like Le Pen had a point.

The former Rothschild banker was keen to stress when he agreed with candidates, even Marine Le Pen when she brought up the subject of autism, but did he do enough make him stand out from the others?

For her part Le Pen was combative and belligerent throughout especially when attacked on her hardline stance on Islam and the burqini and her plan to pull France out of the euro.

Former frontrunner Fillon, 63 said Le Pen's proposal to ditch the euro and bring back the French franc would cause “economic and social chaos.”

Le Pen hit back accusing the former prime minister of operating “Project Fear”. Those who already back her would not have been concerned by the attacks against her and will have welcomed her willingness to take the fight to Macron.

For his part, Fillon, took a long time to get into the debate and was mocked on France's Twittersphere for going missing in the first half, when many were left wondering whether he had even turned up.

This spoof tweet warning the public that Fillon had been kidnapped after disappearing from the debate was one of many mocking the scandal-hit candidate for going missing.

Fillon had been hoping for a boost Monday after taking a battering over revelations that his wife was paid hundreds of thousands of euros for a suspected fake job as a parliamentary assistant and allegations that he accepted luxury suits from a rich benefactor.

While he escaped any real attacks about the scandal which will have relieved him, Fillon came across as tentative and unwilling or unable to land any real blows on opponents.

He is running out of time to close the gap on Emmanuel Macron and Marine Le Pen, both of whom, polls say, will reach the crucial second round run-off vote on May 7th.

As for the two leftist candidates Benoit Hamon and Jean-Luc Melenchon there was only one winner.

While Melenchon's name trended on Twitter during the debate and he topped other public polls well ahead of Macron.

Analysts accepted the candidate, known for his fiery public speeches had outperformed his low poll ratings,.

Hamon, just as during much of the campaign so far, was fairly anonymous.

The snap poll of TV viewers revealed the public though Hamon was the least convincing.

Still with another debate to come involving all 11 candidates there is still plenty to play for and in this election race, anything could happen yet.

Candidates will await the polls in the coming days to fully know who were the real winners and losers from the TV debate.