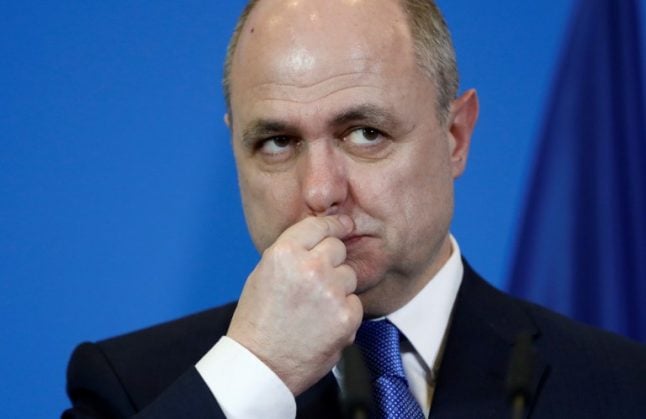 Photo: AFP
Le Roux, 51, said he did not want the investigation into the contracts, for which his daughters earned a total of €55,000 ($59,500), to “undermine the work of the government”.
The TMC channel reported late Monday that the Socialist minister gave his daughters several short-term contracts between 2009 and 2016 for which they earned a total of €55,000 ($59,500).
The work was spread out over a total of 24 short-term contracts – known as CDD in France – from when the daughters were at high school and university, claimed the satirical French TV show Quotidien, which revealed the story.
Socialist Prime Minister Bernard Cazeneuve, without naming Le Roux or referring to the scandal, said at a Paris event on Tuesday that government officials must be “irreproachable”.
“Otherwise the authority of the state is weakened,” Cazeneuve said.
Le Roux was conspicuously absent from the event after initially being scheduled to attend.
The interior minister also slipped out of a Senate hearing without speaking to reporters and cancelled two other appearances on Tuesday.
The daughters, who are now aged 23 and 20, worked for Le Roux when he was an MP for the department of Seine-Saint-Denis.
They started working for their dad at the age of 15 and 16 respectively, the show noted.
“Of course, I have my daughters who worked with me, especially during  the summers, but never on a permanent basis,” the minister told the show.
A report from the National Assembly said the average age of a parliamentary assistant in France is 40.
The scandal comes amid a formal probe into presidential candidate Francois Fillon who employed his wife as a parliamentary assistant on a healthy salary over several years. It is alleged Penelope Fillon did little if anything to merit the salary.
He was officially charged earlier this month over the “fake jobs” scandal, and is being investigated for various offences including misuse of public funds.

“Of course, I have my daughters who worked with me, especially during  the summers, but never on a permanent basis,” the minister told the newspaper.