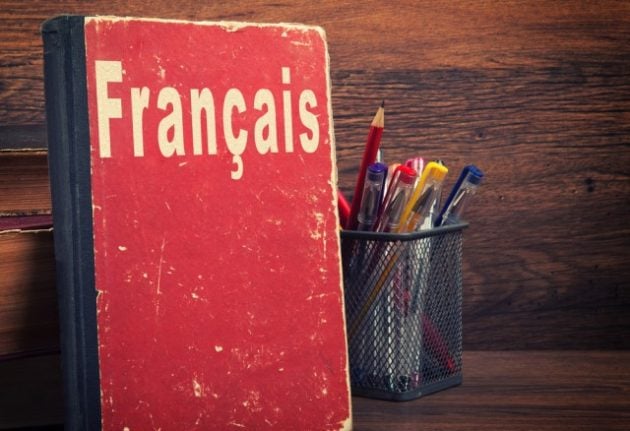 Those fanatical guardians of the French language over at the Académie Francaise have plenty to smile about these days.

Why? Because despite the dominance of English, the number of French speakers has actually shot up in recent years.

In 2014, there were an estimated 274 million speakers of the language – a 25 percent increase since 2010 – according to the most recent report by the International Organization of la Francophonie (OIF).

Of this number, 212 million spoke the language on a day-to-day basis, representing a rise of seven percent in four years.

Notably, countries in sub-Saharan Africa saw a 15-percent hike in French speakers, thanks to demographic growth and the prioritizing of French in the education system.

Along with English, it's the only language to be spoken on all five continents.

Moreover, French was found to be the second most studied language in the world, (with 900, 000 French teachers world wide), the fifth most spoken language, the second working language in most organizations and the fourth language of the internet.

However, while the overall trend is positive, the French tongue is actually declining in its European homeland. Only 36 percent of French speakers can be found in Europe, with the majority, over 54 percent in Africa.

“We don’t have numbers for all countries, but this is a phenomenon that is affecting all foreign languages in Europe except English,” said Alexandre Wolff from the Observatory for the French Language. This is partly due to the lack of foreign-language teaching in European schools, he told The Local.

“In the United Kingdom, for example, French is taught as a foreign language but it’s not obligatory at a higher level.

“In Germany, Italy and Sweden, English is usually the only obligatory language. As a result, other languages are suffering.”

Despite French being the second language of business according to OIF, it has been usurped by English in many international organizations where French used to be an official working language.

Efforts to reinforce French as the working language of France can even be found on building sites.

In March 2017, the Paris region passed a so-called Molière clause which orders builders on publicly-funded construction sites to speak in French, following similar regulations in the Normandy, Hauts-de-France and Auvergne-Rhone-Alpes regions.

But not all French officials have shared the view that French needs conservation.

In an interview with The Local in 2015, former French culture minister Fleur Pellerin – who also speaks German and English fluently – said that she saw no point in protecting French from outside influences like English. “We need a dynamic approach towards the language,” she said. “Of course I want to defend the French language – but not to the point of preventing any influence from outside.


“We need to be able to understand the world we are in, and that our language is enriched by external influences. French has always been a language that has been enriched by words from other languages.”

However Pellerin's stance was at odds with that of her fellow minister Annick Girardin.

The then Secretary of State for Francophone countries lamented the use of English in business settings at the expense of French in a tongue-in-cheek open letter peppered with anglicisms to make her point.

(Annick Girardi, is a bit touchy about use of English in business. Photo: AFP)

“Businesses that choose to teach French to their teams based abroad rather than customize the language of Shakespeare in France have seen the benefits, including economic ones,” read one part of the letter, which was addressed to the “business world”.

“On top of that our anglicisms are often incomprehensible for English speakers. Is the expression 'checker ses mails' clear to someone who works in the City of London?”

And French is being invaded by anglicisms more than ever before according to a 2016 study, and, to the shock of many, Paris's Olympic slogan for its 2024 bid was recently revealed to be in English.

French language expert Jean Maillet says the reason so many Anglicisms are storming the French language is partly due to “linguistic laziness”, because many English words are shorter and more user-friendly than their French counterparts.

“They don’t sound nice on the ear, but we use them because they have become automatic,” said Maillet.

Few organizations, however, are investing much energy in protecting the French language from outside influences. Indeed, some – like the OIF – are pushing for a more multilingual approach.

“We don’t see English as a problem – for us, the future is multilingual,” said Wolff.

“So learning French is good, but it’s also good to learn other languages. If you limit yourself to just one foreign language, you are shutting yourself off from a rich cultural world.”

Multilingualism is especially important in international institutions like the EU, he says. Currently, all official documents in the EU are still translated into the bloc’s 24 official languages. But the paperwork and negotiations that lead up to the drafting of these documents are often in English.

In the European commission, use of English has soared while French is plummeting. Only 3.6 percent of documents are edited in French (down from 37 percent in 1998) compared to 81 percent in English, according to a 2016 governmental report.

Problems arise, however, because the “international” English employed in EU business is not always correct, according to Wolff. And that, he says, can lead to misunderstandings that prove to be more costly that translating everything into other languages from the start.

In addition, he insists that the use of more languages leads to ‘richer’ discussions. A balance must be found, he says, between multilingualism and the monolingualism that is threatening to take over.

“Studies have proved that people who study several languages in a multilingual environment, such as Switzerland, have considerable economic advantages. And these advantages were particularly strong when it came to French,” said Wolff.

He points to a study conducted by Bloomberg in 2011, which showed French to be the third most useful language for conducting business around the world, after English and Mandarin.

So what does the future hold for French?

A 2014 study suggested that it could one day become the world’s most spoken language.

Thanks to a population surge in sub-Saharan Africa, it’s possible that 750 million people could be speaking French by 2050.

“We are more or less optimistic,” says Wolff. “The challenge now is to have an effective education system [in Francophone countries] that is capable of taking on more and more children.

“Another challenge is to make sure that French remains the language of teaching in these countries.”

So plenty at stake for Molière and co. but also much reason to be optimistic that French language will remain alive and well.

Another version of this story was published in 2015