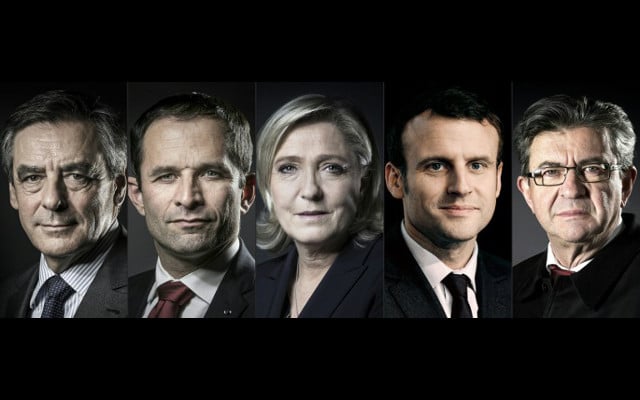 Centrist frontrunner Emmanuel Macron and far-right leader Marine Le Pen are expected to come under attack in the first of three debates ahead of the April 23 opening round in France's most unpredictable election in decades.
A total of 11 candidates spanning the spectrum from Trotskyist left to far right are running for president. Six smaller candidates have been excluded from the debates.
Advisers to 48-year-old Le Pen, who is running neck-and-neck with Macron in polls for the first round but tipped for a sound beating by him in the May 7 run-off, said she would tear into the “globalist” programme of her pro-EU rival.
Most previews of the debate in the French media suggest Macron will come under fire from both the left and the right in Monday's debate, something which he has grown accustomed to in recent weeks. Former economy minister Macron, 39, will also come under pressure from conservative nominee Francois Fillon, who will attempt to claw back votes lost to the centrist since he became embroiled in a damaging expenses scandal.
Polls currently show Fillon, the one-time favourite, crashing out in the first round, behind Le Pen and Macron, following revelations about payments by parliament to his wife and children and loans and lavish gifts from the rich.
The 63-year-old former premier, who has been charged with misuse of public funds, will attempt to shift the focus to his programme, including the radical spending cuts he says represent France's only hope for real change.
READ ALSO: Meet the candidates vying to become the next French president
Ailing left
Two men representing the ailing left — the Socialist Party's  Benoit Hamon and Communist-backed radical Jean-Luc Melenchon, currently running in joint fourth — are also hoping for a boost from Monday's three-hour television joust.
“These elections are a pivotal moment for the French people,” Hamon, a 49-year old leftist rebel who has struggled to make an impact, told a rally in Paris Sunday.
In a taste of what awaits Macron on Monday Hamon laid into the former Rothschild banker, casting him as the candidate of the elite.
“You're unemployed? Start your own company! You're poor? Become billionaires!” he said, alluding to remarks by Macron, a liberal.
Turnout a major factor
The election, in which several political veterans have already been sent packing by voters fed up with politics as usual, could hinge on turnout.
While the Netherlands enjoyed near-record turnout of over 80 percent in its general election, polls in France show only around 65 percent of voters planning to vote in the first round, which would set a record low.
Of those, a whopping 40 percent-plus say they are not yet wedded to any candidate.
Supporters of Macron, who styles himself as a progressive transcending France's entrenched left-right divide, are among the most volatile while Le Pen's are the most loyal, polls show.
“The 2017 campaign is hard to get a handle on,” Pascal Perrineau, a political sciences professor at Sciences Po university wrote in Le Monde daily at the weekend, blaming the steady drip of “affairs, real or imagined” for preventing a real debate.
While most of the focus has been on Fillon's legal woes and the gulf with the “irreproachable” image on which he won the Republicans nomination, Le Pen also goes into the election with several investigations hanging over her party.
Macron, a relative newcomer to politics, has largely avoided scandal but could be tainted by an investigation into possible favouritism over a 2016 event in Las Vegas at which he was the main speaker.