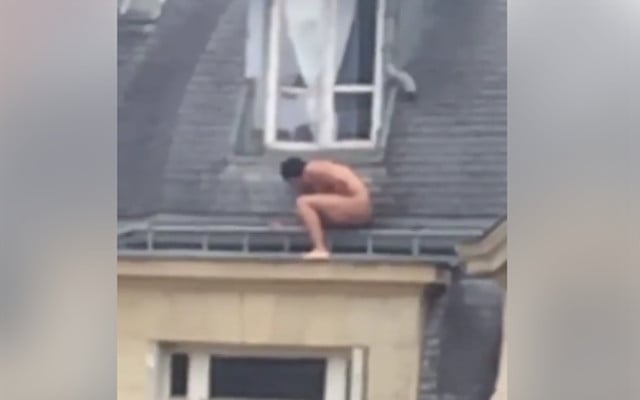 The video posted online last week has since been viewed 2.5 million times but no one yet appears to have come up with the answer to explain the riddle of the naked man.

It was posted on Facebook by Naphtal Ngatali along with the caption: “Who sent you there my brother? He’s seriously in trouble.”

“Are you risking your life for someone's wife?,” the Facebook poster added. “It's a very stupid death”. Although it's not clear if Ngatali actually shot the video herself nor when it was taken.

It shows the man squatting on a ledge, appearing to hide below an open window some six or seven stories above ground level.

Unfortunately it is not clear how he got there or if he was safely able to get back inside.

There was all sorts of speculation in the 18,000 comments posted by viewers with most concluding a woman must have sent him out there after her husband or partner came home unexpectedly.

Others suggested it could have been the person’s parents who made an unannounced appearance.

It could of course be entirely innocent and perhaps the man was a parcours runner, who'd forgotten his kit.

Unfortunately given the circumstances we are unlikely to get to the bottom of the riddle of the naked man given that he is unlikely to come forward to explain his actions.

We just hope he’s safe and sound and found some clothes.