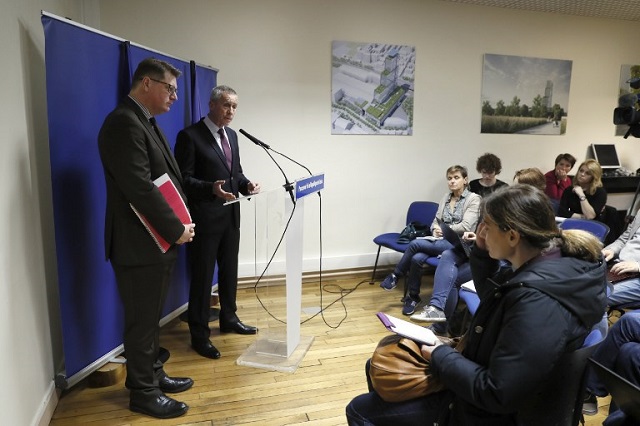 Saturday's assault by 39-year-old Ziyed Ben Belgacem caused a major security scare, leading to the temporary closure of the capital's second-busiest airport and the cancellation of dozens of flights.

By Sunday morning the situation had nearly returned to normal. Ben Belgacem, who was born in France to Tunisian parents, said he wanted to “die for Allah” and that others too would die after grabbing a female soldier, putting a gun to her head and seizing her rifle.

The attack comes with France still on high alert following a series of jihadist attacks that have claimed more than 230 lives in two years.

Security is one of the key issues in France's two-round presidential election on April 23rd and May 7th.

Ben Belgacem's father insisted the assailant – who had spent time in prison for drugs and armed robbery and been investigated for links to radical Islam – was “not a terrorist” and was acting under the influence of drink and drugs.

The father was released from custody late Saturday after being questioned. Investigators were continuing to quiz Ben Belgacem's brother and cousin for clues as to whether the gunman had planned a terror attack or whether the airport attack was the unhinged epilogue to a shooting spree.

'Drink and cannabis to blame'

“My son was not a terrorist. He never prayed and he drank,” his father, whose first name was not given, told Europe 1 radio, blaming “drink and cannabis” for his son's actions.

An autopsy was to to be carried out on Ben Belgacem's body Sunday to determine if alcohol or drugs were a factor.

Paris prosecutor Francois Molins said he appeared to have become caught up in a “sort of headlong flight that became more and more destructive”.

The shooting took place on the second day of a visit to Paris by Britain's Prince William and his wife Kate, which was unaffected.

Ben Belgacem's standoff with the security forces began at around 6.30 am (0530 GMT) in the gritty northern Paris suburb of Garges-les-Gonesse, where he lived.

After spending the night in a bar, he was pulled over by police for speeding. Ben Belgacem drew a gun and fired at the police, slightly injuring one officer.

His father told Europe 1 his son phoned him shortly after the confrontation “in a state of extreme agitation”.

“He said to me: 'Daddy, please forgive me. I've screwed up with a police officer'.”

Ben Belgacem then drove to Orly airport, stopping off first in a bar where he had been drinking hours earlier and firing more shots and then stealing another car.

On the departures floor of the airport, he grabbed a soldier patrolling with two colleagues under the Sentinelle anti-terror operation that has mobilized thousands of troops since January 2015.

“I'm here to die for Allah. In any case, people are going to die,” Molins quoted him as saying.

He tried to use the soldier as a human shield but her colleagues managed to shoot him as they scuffled.

Ben Belgacem was carrying a petrol can in a backpack as well as a copy of the Koran, Molins said. He was investigated in 2015 over his suspected links to Islamist radicals but his name did not feature on the list of those thought to pose a high risk.

A small amount of cocaine and a machete were found during a search of his home on Saturday.

A spokesman for the Paris airport authority said Sunday that the backlog of travellers stranded by the chaos had been cleared and that passengers were experiencing only “slight delays”.

Soldiers guarding key sites have been targeted in four attacks in the past two years that have caused only minor injuries.

In mid-February, a machete-wielding Egyptian man attacked a soldier outside Paris's Louvre museum, injuring him slightly, before being shot and wounded.

French President Francois Hollande said on Saturday his government was “determined to fight relentlessly against terrorism, defend the security of our compatriots and ensure the protection of our country”.