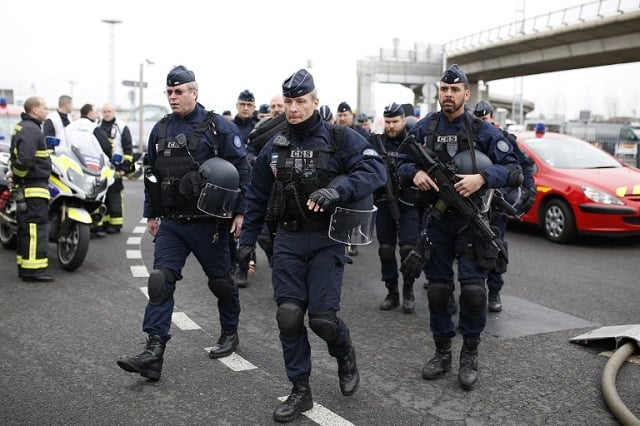 “Put your weapons down, hands on your heads. I'm here to die for Allah. In any case people are going to die,” the attacker told the troops in Molins's account of the attack.

READ MORE: What we know about the Paris airport attacker

He tried to use the soldier as a human shield but she dropped to her knees, giving her two colleagues an opportunity to shoot him. Ben Belgacem was carrying a petrol can in a backpack as well as a copy of the Koran, Molins said. Officials say he had a string of criminal convictions and was previously investigated for links to radical Islam.

The incident comes as France remains on high alert following a series of jihadist attacks that have claimed more than 230 lives since January 2015. Molins said Ben Belgacem had also fired at police in the northern Paris suburb of Garges-les-Gonesse earlier on Saturday, slightly injuring one officer in the head.

The attacker's father, brother and 35-year-old cousin have all been detained for questioning, Molins said. All three had made contact with the police themselves.

Flights were halted at Orly for several hours following the shooting, which happened just before 8:30 am (0730 GMT). Around 3,000 people were evacuated from the building.

Incoming flights were diverted and thousands of passengers stranded at Paris's second-largest airport, but normal service resumed by mid-afternoon.

France goes to the polls on April 23rd in the first round of a two-stage presidential election in which security is one of the main issues on voters' minds. Travellers leaving the airport as an ambulance arrives on the scene. Photo: AFP

Witnesses described scenes of chaos as the shooting took place.

Elite police teams secured the airport and searched it for explosives but none were found.

French President Francois Hollande said his government was “determined to fight relentlessly against terrorism, defend the security of our compatriots and ensure the protection of our country”.

Ben Belgacem is believed to have stolen a car and driven to Orly after shooting at police north of the city, Molins said.

He had committed several armed robberies and was investigated for radicalization in 2015, although he did not feature on the list of those thought to pose a high risk.

He lived in an apartment in Garges-les-Gonesse, which was searched by investigators after the shooting on Saturday.

The shooting took place on the second day of an official visit to Paris by Britain's Prince William and his wife Kate, which was unaffected. France remains under a state of emergency after a series of terror attacks, including the November 2015 massacre in Paris and a truck attack in Nice last July.

In mid-February, a machete-wielding Egyptian man attacked a soldier outside Paris's Louvre museum before being shot and wounded.

The soldiers on patrol at Orly airport belong to Operation Sentinelle, a force of 7,000 troops deployed in the capital and other cities after the January 2015 attacks in Paris.

On Thursday, a letter bomb exploded at the Paris offices of the International Monetary Fund, injuring a secretary who suffered burns to her hands and face.

Investigators suspect a Greek far-left group was behind the attack, which Hollande said showed that France was “still targeted”.

By Clare Byrne and Romain Fonsegrives