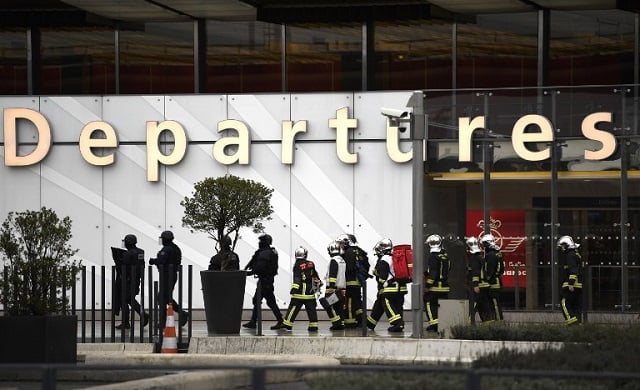 Anti-terror investigators Sunday released the father of the assailant but were continuing to hold his brother and cousin as they sought to build a profile of Ziyed Ben Belgacem, a 39-year-old French national.

All three family members had made contact with the police themselves, Paris prosecutor Francois Molins told a press conference late on Saturday.

Molins said Ben Belgacem grabbed a female soldier and put a gun to her head, seizing her assault rifle.

“Put your weapons down, hands on your heads. I'm here to die for Allah. In any case, people are going to die,” the attacker told the troops in Molins's account of the attack.

He tried to use the soldier as a human shield but she dropped to her knees, giving her two colleagues an opportunity to shoot him.

Ben Belgacem was carrying a petrol can in a backpack as well as a copy of the Koran, Molins said. Officials say he had a string of criminal convictions and was previously investigated for links to radical Islam.

An autopsy is to be carried out on Sunday to determine if he was under the effects of alcohol or drugs during the attack, the sources said.

A small amount of cocaine and a machete were found during a search of his apartment in in the northern Paris suburb of Garges-les-Gonesse on Saturday afternoon.

Flights were halted at Orly for several hours following the shooting, which happened just before 8:30 am (0730 GMT). Around 3,000 people were evacuated from the building.

“The air traffic is fairly normal”, a spokesman for the Paris airport authority told AFP on Sunday morning.

“There are however still some slight delays, of on average around 20 minutes”.

About 100 people who were unable to board flights slept at Orly in beds provided by the airport, while 100 to 200 others spent the night at hotels provided by airlines.

Molins said Ben Belgacem had also fired at police in Garges-les-Gonesse earlier on Saturday, slightly injuring one officer in the head.

His father and brother told investigators he had contacted them an hour and a half after that incident, telling them he had 'done something stupid'.

His 35-year-old cousin had also met with the suspect in a bar on Friday night.

The incident comes as France remains on high alert following a series of jihadist attacks that have claimed more than 230 lives since January 2015.