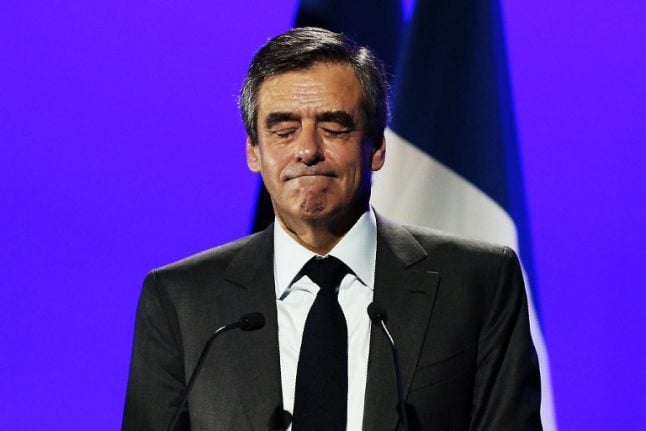 Photo: AFP
The probe into possible influence peddling will be part of an ongoing investigation into a fake jobs scandal that saw the 63-year-old Fillon charged on Tuesday with misuse of public funds, a judicial source told AFP.
It comes a little over six weeks ahead of France's two-stage presidential election, with polls showing Fillon failing to make it past the April 23 first round.
Fillon, an avowed Catholic, was the surprise winner of the rightwing Republicans' primary in November after campaigning as a man of integrity.
He was charged Tuesday over payments totalling €680,000 ($731,600) to his wife Penelope between 1986 and 2013 from funds made available to lawmakers for parliamentary assistants.
The onetime frontrunner in the presidential race was also charged over failing to declare to a state transparency watchdog a 2013 interest-free loan of 50,000 euros. Fillon has since repaid the money.
Investigators are now focusing on clothing furnished in February by luxury Paris tailor Arnys worth some €13,000 and paid for by an unnamed wealthy friend, the judicial source said.
The Journal du Dimanche newspaper claimed that an anonymous benefactor had paid nearly €48,500 for Arnys garments for the former prime minister since 2012, including the clothes paid for by cheque last month.
The other gifts were paid for in cash, the paper reported.
Fillon, who has admitted that a friend had paid for two suits in February, repeated assertions that he was the target of a “witch hunt” by journalists.
'Manipulation'
“Everyday I am hit with a new squall. I face it, I continue on. I stay the course,” he told a rally on Thursday in the northwestern French city of Caen.
He claimed Wednesday to have the backing of angry voters “who don't want to see their election stolen.”
Fillon is not the only candidate under scrutiny, with far-right National Front leader Marine Le Pen, 48, and her father, former party leader Jean-Marie Le Pen, under investigation over the value of their family properties.
The anti-immigration, anti-EU leader faces several other investigations into campaign financing and the misuse of money at the European Parliament, where she has a seat.
But the scandals appear to have little effect on her poll standings, and she is running neck-and-neck for the first round with centrist candidate Emmanuel Macron.
On Tuesday, the Paris prosecutors' office opened a preliminary enquiry into a state-financed event attended by 39-year-old Macron last year while he was economy minister.
The probe into the organisation of a promotional evening for French hi-tech companies in Las Vegas does not target Macron personally, but could add to disillusionment among French voters with their political class.
Fillon's woes appear to have so far benefited Macron in particular, who is running as an independent for his new “En Marche” (On the Move) movement.
He and the anti-establishment Le Pen are shown in opinion polls to be the likely top two candidates in the first round on April 23.
Polls suggest Macron would beat Le Pen in the decisive runoff on May 7 — but after Donald Trump's victory in the United States and Britain's vote to leave the European Union, analysts caution against bold predictions.