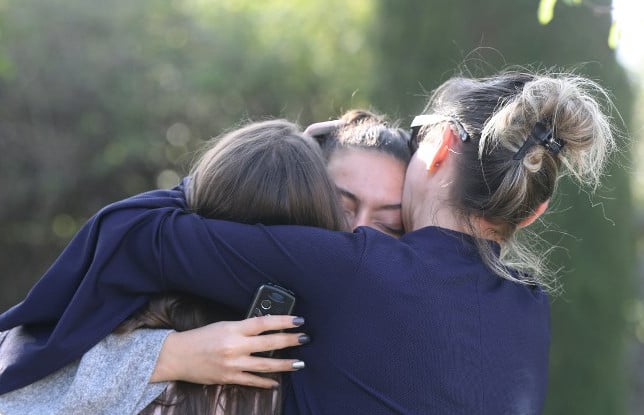 Photo: AFP
French Education Minister Najat Vallaud-Belkacem said the “heroic” actions by the headteacher appeared to have helped prevent greater bloodshed.
The headteacher rushed towards the pupil as he pulled out his guns “to try to reason with him,” Vallaud-Belkacem said, adding that the educator was injured in the process. “We avoided the worst,” she said.
One witness, 17-year-old Thomas, told the Nice-Matin newspaper that the headteacher showed an “incredibly level head” during the ordeal, in which four people were lightly injured, including the head teacher.
“I was too far away to hear what he was saying, but he stayed calm, even after he had been hit by a shot,” the pupil told the paper.
“Even with a bullet in his arm he continued to be the voice of reason.”

Another pupil said that when pupils were running for their lives, Pizzinat remained at the scene trying to protect others.

A police source told L'Express newspaper said that during the shooting, the gunman told the headteacher, “It's not you I'm after”.

It is believed the teenage shooter had a grudge against some of his class mates.

While Pizzinat remains in hospital for his injuries, Eric Ciotti, who represents the department of Alpes-Maritimes in the National Assembly, has asked that he is awarded the Legion of Honour.
Investigators said the shooter, a 16-year-old student at the Alexis de Tocqueville high school in the hillside town of Grasse, was also carrying a homemade explosive device in a bag.
He used a pump-action firearm, but not the other weapons, and offered no resistance to his arrest, the prosecutor said.
READ ALSO: What we know about troubled teenager behind French high-school shooting The teenager was described by Vallaud-Belkacem as “unstable and fascinated by guns” and was carrying a rifle, two handguns and grenades — which may have been dummy devices — when he was detained by police shortly after the lunchtime attack.
The suspect had shared pictures and videos on social media of infamous US school shootings, including the 1999 Columbine massacre in Littleton, Colorado, in which two teens killed 13 people before committing suicide.
France is still in a state of emergency after a series of terror attacks, including the November 2015 massacre in Paris and a truck attack in Nice, just 40 kilometres (25 miles) from Grasse, in July last year.
Many feared the worst when news first filtered through of the violence, with elite police response teams immediately dispatched to the scene.
The shooting comes around 40 days ahead of the first round of France's two-stage presidential election, in which security is one of the main issues on voters' minds.