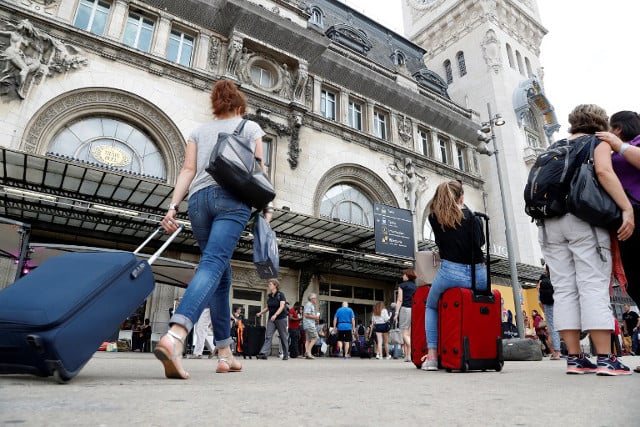 Photo: AFP
No trains will run from or to Gare de Lyon in Paris from midnight Friday 17th of March to midnight on Sunday 19th of March.
As part of large-scale SNCF train company works to modernise the signalling in the busy station it will close for the entire 48 hour period.
However metro and RER services will still run with some interruptions.
RER lines D and R will be closed between Châtelet-les-Halles and Villeneuve-Saint-Georges, Juvisy and Corbeil-Essonnes via Ris-Orangis and Corbeil-Essonnes and Melun.
RER line A will continue to run as usual through Gare de Lyon as it uses RATP trains.
For those travelling further afield in France, passengers will have to start or end their journeys at other stations:
For Marseille and the Côte d'Azur, trains will arrive and leave from Marne-la-Vallée and Charles-de-Gaulle Airport.
For Lyon, trains will go through Marne-la-Vallée station.
For Switzerland, it's Gare de l'Est.
For Grenoble and the French Alps passengers can use Versailles-Chantiers, via Massy-Palaiseau station.
And trains for the Languedoc region will arrive and depart from Montparnasse station.
Incoming Intercités trains coming from Auvergne and Burgundy will also be redirected to Gare d’Austerlitz.
SCNF's help page, here, provides information on exchanges, refunds and live updates.
Photo: Brian smithson/ Flickr