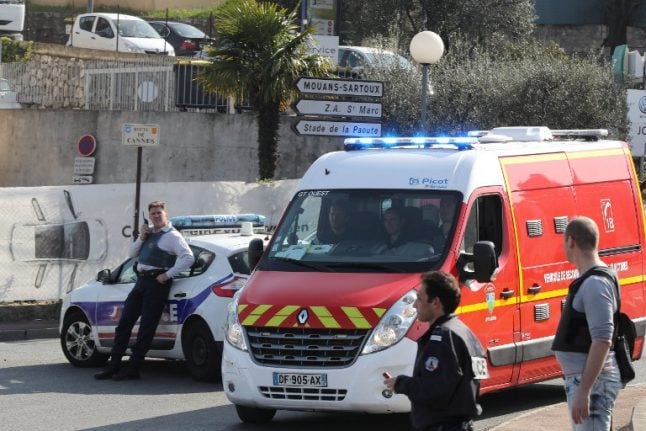 Eight people were injured in a shooting at a high school in the southern French town of Grasse on Thursday which saw the headteacher targeted, police and local authorities said.

One 17-year-old pupil armed with a rifle, two handguns and two grenades was arrested after the shooting at the Tocqueville high school, a police source told AFP.

According to BFM TV the shooter was not known to police intelligence services and even though the French government triggered its terror attack alert, the shooting is not believed to have been motivated by terrorism. “I heard four shots, then there was total panic,” an 18-year-old witness, Andreas, told BFM TV.
“We all started to run, we didn't know what was happening, and who was hurt. I have no idea what's going on in the head of the person who did this. I have no words,” he said.
There was conflicting information about whether a second suspect was on the run, with police initially telling AFP they were looking for an accomplice.

All schools in the town some 40 kilometres (25 miles) west of the Riviera resort of Nice were locked down, education authorities said.

A crisis cell has been put in place, education official Emmanuel Ethis said on Twitter.

Ethis urged worried parents not to travel to the school, saying that “pupils are safe”.

The French government initiated an attack alert via smartphone in the wake of the shooting.

Local officials told AFP that several pupils had fled and sought refuge in a nearby supermarket “which created panic and rumours of an attack”. “The other pupils have been asked to stay in the school and not panic,” local officials said.

Interior Minister Bernard Cazeneuve cut short a trip to the northern Somme area because of the Grasse shooting, as well as a letter bomb blast at the offices of the International Monetary Fund in Paris on Thursday.

The education minister was also on her way to the school.

France is still in a state of emergency after a series of terror attacks including an IS-claimed massacre in Paris in November 2015 in which 130 people died and a truck attack in Nice in July last year.

Authorities in the jittery nation have bolstered security outside schools

More than 3,000 reservists were called up to help keep watch outside the country's 64,000 primary and secondary schools for the return to the school year in September.

Latest reports suggest the situation is now under control around the Tocqueville high school in Grasse after the shooting that occurred around 1pm.

The 17-year-old pupil who opened fire has been arrested. He was found to be carrying a revolver, a pistol, a hunting rifle and two grenades.

Four people were left slightly injured including the school's headteacher, who was believed to be the target of the shooting.

The pupil's motivation is unknown and even  though the French government triggered its terror attack warning app, the latest reports play down any link to terrorism. The latest unconfirmed reports say four people, including the school's headteacher, who was the target of the attack, have been lightly injured.

Police say person arrested is the high school pupil who was armed with a revolver, a pistol a hunting rifle and two grenades.

They have now ruled out earlier reports that another suspect was on the run.

13:55 Latest on Grasse schools in lock down from AFP

Schools in the southeastern French town of Grasse were placed under lockdown on Thursday following a shooting at a high school in which two people were injured, the regional educational chief said.

A crisis cell has been put in place after the attack at the Tocqueville high school, education official Emmanuel Ethis said on Twitter. Even though the government sent out an alert from its terror attack app, it doesn't mean the shooting was linked to terrorism as was initially feared.

BFM TV are now playing down any link to terror, although there has been no other motive given.

13:48 – Reports say the shooter was a high school pupil

French TV now reporting the shooter was pupil at the high school, aged 16 or 17. He was armed with a “two sidearms and a hunting rifle.” Local officials say all schools in the town near Cannes have locked their doors to protect pupils.

The shooting occurred at the Alexis de Tocqueville high school in the town of Grasse not far from the Riviera resorts of Cannes and Antibes.

An intruder burst into the Tocqueville high school and opened fire, one of the sources said. Reports on France's BFM TV said the man was armed with several weapons and opened fire on the headteacher.

Local police tweeted out a message telling residents to stay at home while the government's terrorist alert warning was triggered on its mobile app.

Police have also tweeted out telling residents to avoid the area around the “Chemin de L'Orme” sector because of an ongoing police operation.

Members of France's elite commando police RAID unit were immediately dispatched to the school. There were unconfirmed reports from BFM TV that one person had been arrested while another, a possible accomplice, was “on the run”.

All schools in the area around Grasse have locked their doors and pupils are being kept inside for their safety.