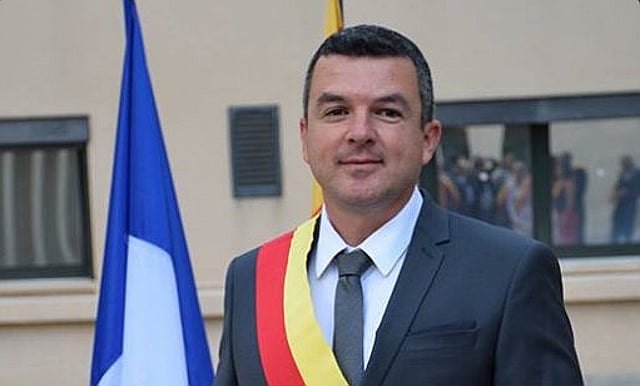 Photo: Benoit Loeuillet/Twitter
In a documentary to be aired on French television later Wednesday, Benoit Loeuillet is heard discussing the mass killing of Jews during World War II, saying “I don't think there were that many deaths. There weren't six million.”
After being shown selling books by Adolf Hitler and Holocaust-denying writer Robert Faurisson, he continues: “There weren't mass murders as it's been said.”
The comments come less than six weeks before presidential elections in which FN leader Marine Le Pen is a frontrunner after spending years trying to improve the party's image.
Her estranged father Jean-Marie, a former paratrooper who co-founded the party in the 1970s, has been convicted repeatedly for anti-Semitic and racist comments such as calling the Holocaust a “detail of history”.
The FN's head in southeast France — a stronghold region for the party — said Loeuillet had been suspended from the party and would face disciplinary proceedings, which could lead to his expulsion.
In a statement Wednesday, Loeuillet said he had “in no way denied the reality of the Holocaust,” adding that his remarks had been “cleverly edited” for the documentary.
“I understand the emotion (the comments) can cause as they are presented, cleverly edited. But I am the opposite of the portrait of me that this documentary seeks to paint,” he said, adding that his lawyer would lodge a complaint against the film's director.
But he added: “I understand perfectly that the National Front leadership deemed it opportune to suspend me in the midst of such media hysteria.”
Le Pen's niece Marion Marechal-Le Pen, a National Front MP from the region and a rising star in the party, said Loeuillet “never made these sorts of comments in front of us, which are unacceptable.”
The documentary to be shown on the C8 channel also shows Philippe Vardon, a campaign advisor to Marine Le Pen, handing out flyers and joking: “It's starting to get worrying: everyone who's shaking my hand is black.”
A source close to Marechal-Le Pen told AFP that Vardon was “being ironic”.
A rightwing Republicans party leader in the region, Christian Estrosi, mocked Loeuillet's suspension, tweeting: “The fake surprise of the (FN) officials is ridiculous.”