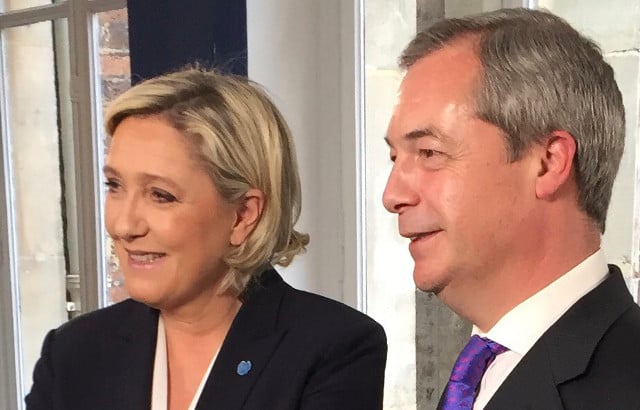 Marine Le Pen, who firmly believes she is on course to become the next French president, praised the UK's “honourable” Brexit voters who freed Britain from a “huge prison”.

She was speaking in an interview with Nigel Farage, one of the key leaders of the pro-Brexit campaign.

The National Front leader said those who have suggested the future rights of Brits in France and of the French in the UK would be threatened by Brexit or even a Frexit were engaging in fear-mongering.

“This is another strategy of fear,” Le Pen told Farage as part of an interview for his UK radio show to be aired on Wednesday.

“When people live on our territory and are not criminals, they do not dispute our laws or our way of life, our customs, our values.

“I see no reason why we should not continue to welcome them in the French style.”

Le Pen is hoping the same populist momentum that brought Donald Trump to power and pushed a majority of British voters to back Brexit will help her defy the odds and the opinion polls to become French president.

That prospect is worrying Brits living in France who fear the double whammy of Britain leaving the EU and nationalist Le Pen, who once said she wanted to “explode the EU”, taking charge in France.

“I'm waiting to see what happens with the French elections, because I don't fancy being thrown out of the EU, then being told I'm not welcome here either,” said one worried British member of the Remain in France Together Facebook group.

It's unlikely Le Pen's words will reassure many who fear what she would do if she gained power.

“I wouldn't believe her if she was the last one on earth just look at the company she keeps… Farage,” said another member of the Remain in France Together group.

Another said: “She could give no more assurances than a chocolate fireguard.”

READ ALSO: 'French First': What a 'President Le Pen' has in mind for France If elected Le Pen will seek to regain certain powers from Brussels including economic and legal sovereignty as well as control of France's borders.

If she fails then she will hold a referendum on whether France should leave the EU.

If she succeeded in persuading the French to vote for Frexit she says Britain and France could agree their own trade deal once they were out of the EU.

“I see no reason why France and Britain should not have excellent relations – we are old allies”.

The anti-EU Le Pen was speaking to Nigel Farage, who as Ukip leader had refused to unite with Le Pen’s National Front in the European Parliament deeming the French right wing party “prejudiced and anti-Semitic.

But Farage appears to have softened his stance with images showing him smiling and joking with Le Pen as he interviewed her for his UK radio show.

Le Pen criticised UK Prime Minister Theresa for refusing to meet with her, despite the fact she had made time to meet her presidential rival Emmanuel Macron when he visited London.

The National Front leader said May was “inconsistent” for accepting pro-EU Macron “a key sales person of globalisation and mass immigration… because these are the opposite of what Brexit stands for and the choice made by the British people.”

“I do not understand this inconsistency, this contradiction.”