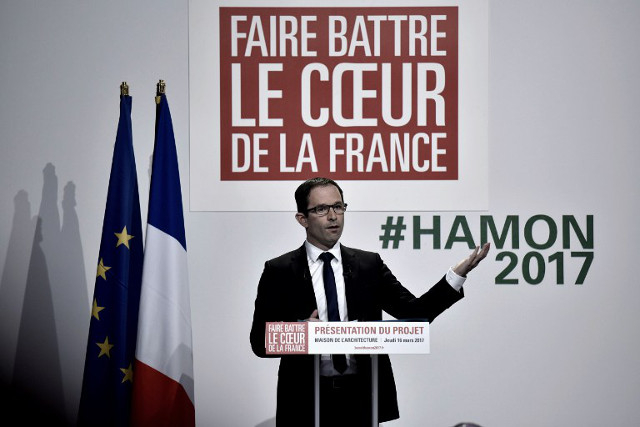 Benoit Hamon the Socialist party candidate announced measures to strengthen France's democracy, saying “citizens feel like decisions that concern them are more and more distant from them.”
He wants to create France's sixth Republic. Currently on republic number five, France updates the number when the constitution is significantly changed.
He's proposing a referendum on allowing foreigners to vote in local elections, recognising blank votes in elections and replacing France's five year presidential terms with a non-renewable seven year term.
Notably, he plans to write in “a citizen 49.3 rule” into the French constitution.
This would allow 1 percent of the electorate to put forward a suggestion for a law, created by citizens or suspend a law enacted by parliament from coming into effect until there has been a referendum on it.
Economy Photo: AFP
Hamon suggests the “possibility of temporarily nationalising” some companies and imposing a tax on “super-profits” from banks
This tax will help finance his somewhat controversial plan to instate a universal basic income for all citizens, as a strategy to help France adapt to the digital revolution and loss of traditional jobs.
While Hamon had previously talked of providing the income to all adults, he has now said it would only, initially at least to people earning less than €2,200 a month.
He would also increase France's national minimum wage known as the SMIC and would scrap the goverment's controversial labour reforms that lead to strikes and protests last year.
Hamon also wants to impose a “social contribution” on robots which would be paid into a kind of “employment transition” fund.
The candidate also wants to remove state funding for companies who relocate outside France.
One of his new proposals is to prioritise “Made in France” industries, setting aside 50 percent of government contracts for small and medium sized businesses.
Energy and environment
“We cannot continue to produce and consume as we have until now, transitioning energy sources is crucial and central to my plan.”
Hamon says he will move France away from its reliance on nuclear power and write the preservation of environmental public goods like water and air into the constitution.
Education
Recruit 40,000 teachers as well as place a limit of 25 pupils on certain class sizes in primary schools.
Hamon would also redraw the school map to help “mixité” – in other words make sure pupils in poorer areas can get to schools in better off neighbourhoods.
Foreign policy
The Socialist party candidate wants France to officially recognise the state of Palestine, meaning it will be officially considered to be a separate state to that of Israel.
Legalising cannabis
In one of Hamon's more attention grabbing stances, he has said he would legalise cannabis if elected. He announced in more detail how he would achieve this by “creating state owned points of sale” for the drug, where minors are not allowed, which would eventually be accompanied by health prescriptions for cannabis.
Security
Hamon wants 5,000 more police and a wage hike for those officer working in “sensitive” areas.
And other proposals:
Hamon wants to create a right to die with dignity and create a “humanitarian visa” for refugees.
By Rose Trigg