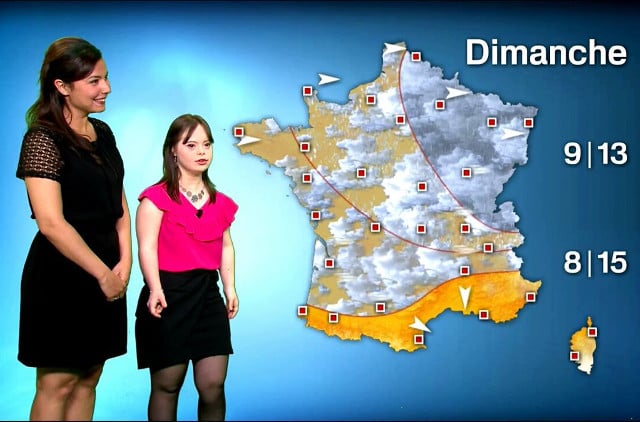 Photo: Screenshot France2
Segard provided a summary of the weekend weather on France 2, achieving a personal goal that she hopes will also boost awareness for people with Down's.
She soared to prominence after an advocacy group, UNAPEI, launched an awareness campaign ahead of World Down's Syndrome Day on March 21, entitled “Melanie can do it.”
On her Facebook page, Melanie announced that her dream was to present the weather, and vowed to do it if she scored more than 100,000 “likes.”
Within 10 days, she had picked up 200,000 “likes” and drawn a following of thousands on Twitter.
France 2 heard of the buzz and gave her a chance.
Before her broadcast, the channel showed her rehearsing her lines and being made up for the cameras.
Segard, shy and clearly moved by the event, was flanked by the channel's forecaster, Anais Baydemir, who paid tribute to her flawless delivery, as did her fans on Twitter.
“A magical television moment,” said one. “Bravo, Melanie, we are all equal,” said another.
Melanie herself tweeted, “That's it, I've done it, I'm finally a weather girl,” adding: “I am different, but I can do lots of things.”
Down's syndrome is the most common genetic form of intellectual disability. Also known as trisomy 21, the condition is caused by the presence of an extra, or third, copy of chromosome number 21.
Humans normally have 23 pairs of chromosomes, which together contain up to 25,000 protein-coding genes.
Around one in 1,000 people have Down's, according to the World Health Organization (WHO). In France, there are an estimated 65,000.
Segard's achievement comes on the heels of a 19-year-old Down's woman, Laura Hayoun, who presented the headlines on news channel BFMTV in 2013.
Last month, Madeline Stuart, a 20-year-old Australian model with Down's, took part in a fashion show in New York and debuted her own label, called “21 Reasons Why.”
Url copied to clipboard!