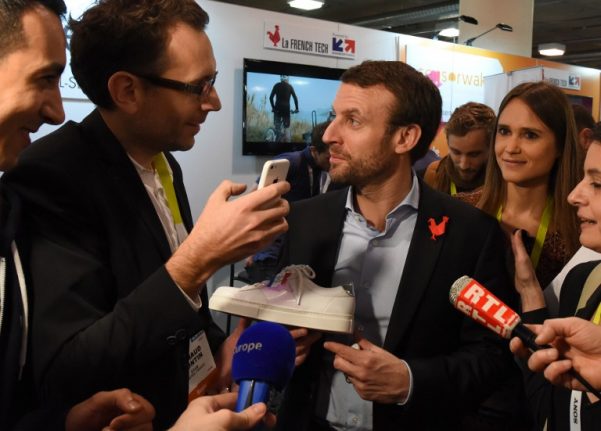 A (bearded) Macron at the 2016 Vegas show. Photo: AFP
The glitzy event at the CES electronics fair was organised without a public tender by a unit within the economy ministry, which was then headed by Macron before he left the government to launch his bid for the French presidency.
The 39-year-old Macron, an independent running for office for the first time, is currently tipped in opinion polls to win the two-stage presidential election scheduled for April 23 and May 7.
Public relations giant Havas was chosen to organise the January 2016 event, which cost nearly €400,000 ($425,000), without bids being sought from other companies.
The satirical and investigative newspaper Le Canard Enchainé, which first revealed the affair, said the hotel tab alone was some €100,000.
An aide to Macron, who has denied any wrongdoing, told AFP that the investigation would look into Business France, the unit within the ministry tasked with organising the event.
“It's in no way a story about Macron,” he said.
Several of Macron's economy ministry colleagues formerly worked at Havas.
Current Economy Minister Michel Sapin last week blamed the affair on a “malfunction” by Business France, which “if it thought the timeline was too short, should have said it could not organise the event according to the rules, which it didn't do.”
Business France, in a statement, recognised “potential irregularity” in the organisation of the event.
In the presidential race, Macron's fortunes have been boosted by a string of scandals hitting conservative candidate Francois Fillon, a former frontrunner who was charged Tuesday with misuse of public funds.
It was the Canard Enchainé that broke the so-called Penelopegate scandal with revelations that Fillon, 63, had paid his wife Penelope hundreds of thousands of euros of taxpayers' money for which she is alleged to have done little work.
Far-right presidential hopeful Marine Le Pen also faces multiple investigations over campaign financing and misuse of money at the European Parliament.
Two aides, including her personal assistant, have been charged but she has refused to reply to summons from judges over the parliamentary expenses case.