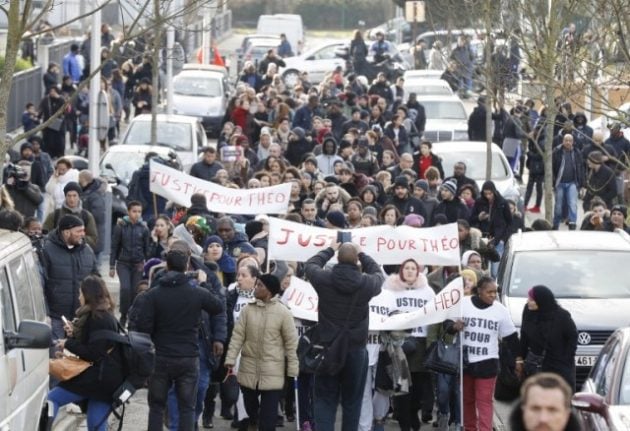 Protesters in Aulnay-sous-Bois after the recent alleged police rape of a young man. Photo: AFP
“Frankly, whichever candidate ends up winning, things will stay the same,” 18-year-old Samuel Lathes, who lives in the gritty Paris suburb of Aulnay-sous-Bois, told The Local.
While the run up to a presidential election normally inspires feelings of hope – just ask those who voted for François Hollande in 2012 – in Aulnay-sous-Bois, which like many of the suburbs to the north and east of the capital feels run-down, unloved and neglected, there is only anger and disillusionment towards France's political class.
It appears the choice of anti-immigration Marine Le Pen, former Rothschild banker Emmanuel Macron, the scandal hit François Fillon and two leftist candidates, Benoit Hamon and Jean-Luc Melenchon, who appear to have little hope of victory, is failing to inspire the disillusioned residents of Aulnay.
“I think the candidates don't care much about Aulnay-sous-Bois,” Louis Poirault, who has lived in Aulnay for 15 years, told The Local. “And I doubt they will do anything worthwhile, for here or for France.”
Racial tensions simmer too in this suburb with a high immigration population. Aulnay erupted in violence after the recent alleged police rape of a young black man named Theo, there is little sign of the election fever that has gripped the more well-to-do folk down the road in Paris.
But then the residents in deprived suburbs around Paris have long felt distanced from the thriving centre.
For a start, in the capital they're physically cut off from the city by an enormous ring road, and many of the neighbourhoods are notoriously hard to reach by public transport.
But they are not just physically cut off. Those living in the banlieues feel removed both socially and economically.
The Paris suburbs – many of which have been classified as “sensitive urban areas” (zone urbaine sensible) – can see unemployment rates more than twice as high as the national average, with those under the age of 24 often the hardest hit.
The suburbs are often also home to higher poverty and crime rates, not to mention a higher rate of high school drop outs.
While French presidents have long promised to improve the situation, things remain by and large the same. Hope and faith in the establishment dwindles with each French presidential election.

It's no surprise then that many say they have little intention of voting in the upcoming election. The suburb's train station. Photo: The Local
“All my close friends and family are talking about this,” said Zahra Gharrass, a 30-year-old real estate agent. “Like me, they all feel disappointed. So none of us are planning to vote.”
Aulnay-sous-Bois hasn't traditionally shown a particularly high abstention rate. In fact, in the 2012 election only 23.6 percent of residents didn't vote – which is only slightly higher than the average for France.
The majority of voters in the suburb – 62.7 percent – voted for Socialist candidate Francois Hollande in the second round. He was ushered into power on the back of his promise of change.
But Hollande failed to achieve what he pledged to do and residents say Aulnay has not changed for the better.
Unemployment in the area is already higher than the rest of France, with the rate reaching around 12 percent in recent years (compared to about 10 percent across France).
“It's all a mess and it's getting worse, I don't even want to talk about it,” an elderly man says, waving his hand dismissively before walking away. After failing to see the fruits of picking the winning candidate last time round, residents say they can't foresee much change regardless of who they vote for in this year.
“People feel disillusioned because they see neither the left nor the right offering much of a change. That's the problem. Politicians are seen as unable to do much for people's daily lives,” said 47-year-old Gilles Rivet.
The suburb's train station. Photo: The Local
When you add a general distrust of French authorities to the mix, it's little wonder that people aren't fired up by the election.
The shadow cast by the alleged police rape of 22-year-old Theo still lingers on and other incidents of alleged police racism and brutality only act to build up feelings of mistrust between the population and the state.
Gilles Rivet says incidents of “latent police racism” are fairly common.
“Last week I saw a woman wearing a partial veil here at the train station. She had covered her mouth with it – it was cold – and then the police started to arrest her. I was stupefied,” he said.

“And these aren't isolated incidents either. Things are very tense here in the suburbs.” Graffiti at the police station in Aulnay-sous-Bois last month read “Fuck the police”. Photo: AFP
While protests in suburbs against French police brutality were able to mobilize many earlier this year, France's politicians will find it harder to muster the same enthusiasm.
“The politicians are taking us for idiots. I have voted in the past, but there's no way I'm voting now. It's always the same, the politicians are thieves,” one taxi driver named Ben said.