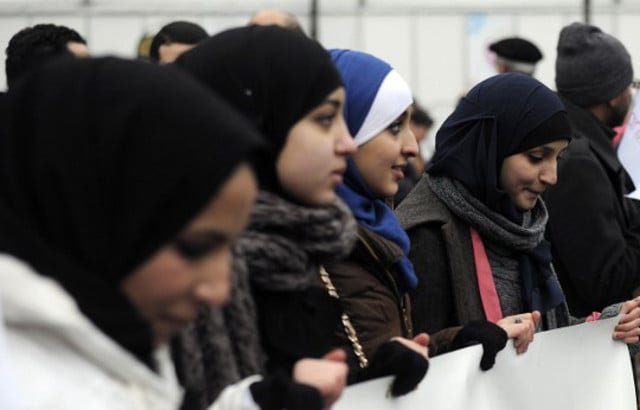 Will companies in strictly secular France now line up to introduce rules banning staff from wearing the hijab and other religious symbols at work?

The European Court of Justice has made a landmark ruling that could pave the way for a new front in France's controversial relationship with the Muslim headscarf.

After studying the case of a software engineer in France, who was dismissed for refusing to take off her headscarf, judges at the European Court of Justice ruled that companies would not be discriminating against workers if they chose to enforce a ban on religious symbols.

“An internal rule of an undertaking [firm] which prohibits the visible wearing of any political, philosophical or religious sign does not constitute direct discrimination,” the court said.

But the court added that company clients cannot just demand that workers take off their headscarves if there is no rule already in place, the court said.

French woman Asma Bougnaoui was fired from an IT consultancy firm Micropole following a complaint from a customer who said his staff had been “embarrassed” by her headscarf while she was on their premises. The court's adviser had ruled that she had suffered discrimination because she had been “professionally competent”. The court of justice said it was now for a French court to decide if she was unfairly dismissed.

The case had been closely watched in France, where the question of whether companies should be allowed to ban Muslim staff from wearing the veil has long been a divisive issue.

France has already banned the wearing of the hijab by pupils in schools and employees in state buildings in 2004 on the grounds of secularism.

While the ban focused on all religious symbols, many Muslims felt the law was directly targeted at them in order to try to reduce the influence of Islam.

Since 2004 politicians have wanted to extend the headscarf ban to other areas.

There have been regular calls to ban students from wearing the hijab and the far right Marine Le Pen, who is riding high in the polls and expected to make the crucial run-off vote in the presidential election in May, wants to ban the women from wearing the headscarf in all pubic places.

Opinion polls suggest the public are overwhelmingly in favour of a ban on religious symbols at work – some 84 percent according to a 2014 poll.

Those in favour of a veil ban at work also cite a report in April 2015 that showed religious conflict was on the rise in work environments.

The survey revealed almost a quarter of managers (23 percent) said they were regularly confronted with religious issues in the workplace – almost double the figure from the previous year..

Sources of religious conflict included the wearing of religious symbols (17 percent), demanding more flexible working hours (12 percent), requesting time off for religious holidays (19 percent) or refusing to work with a woman (in four percent of cases). (Muslim school mums protest in Paris at being barred from going on school trips if they wear a headscarf. Photo: AFP)

Some companies in France have already taken the initiative to ban religious symbols.

In February 2014 a privately-owned French company claimed to have become the first in the country to ban the wearing of Muslim headscarves and other prominent religious symbols at work.

The 4,000 workers at recycling company Paprec, based in the Parisian suburbs, will no longer be allowed to demonstrate their religious faith by wearing items like the Yarmulke/Kippah (the Jewish skullcap), Christian crosses and Muslim head or face covers.

Critics said the move was illegal but other companies in France, backed by the European Court of Justice, may now follow suit.